What this country needs is stronger gun laws that ban weapons to help prevent gun violence in the United States. Gun violence affects the whole country because we cannot trust that we will be safe. In the cities, we live in packed apartment buildings, we are surrounded by neighbors, we have doormen, and cameras so we can feel safe. But in the middle of the country, where there is nobody, we could be scared that a group of armed people would attack us in our house. We should ban all guns to avoid this type of situation.

According to Gun Violence Archive, so far, in 2016, there were 50,000 incidents in the U.S. involving shootings. Approximately 15,000 people died and 30,000 were severely injured. The victims of these attacks were children, teenagers, adults, even police officers. Do you really want that to keep happening here? I believe that these somewhat accidental, gun involved assailments are tragic and that they should be stopped. Unfortunately, there is no perfect solution, but I believe that the less guns there are available, the safer we all are overall. As the leader of this country, I believe that it is your responsibility to do as the Preamble to the Constitution says: To “insure domestic Tranquility." You can do this by assuring, in your laws, that nobody can buy assault weapons here or bring them in from other countries. I am French and I believe that the attacks in Paris and Nice were heartbreaking. I was tearing up when I watched one of the survivors of the Bataclan Theatre massacre, on Friday the 13th of November, 2015, describe the horrific vision of the 130 corpses he saw on the floor as he escaped almost alone.

I trust that you will understand the gravity of the situation and I would profoundly appreciate it if you took action as soon as you can. If I were you, I would ban guns completely from being used or sold. This will help hinder the terrorist attacks in our country. Yes, it will be hard to have people give up their guns but it will make everyone safer. From apartment buildings to isolated houses in the countryside, everyone will be happier. Thank you for considering this matter and hopefully taking action. 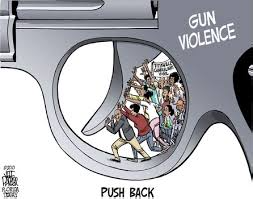 gun deaths gun violence gun laws gun control gun control in the us
Published on Nov 16, 2016
Report a problem... When should you flag content? If the user is making personal attacks, using profanity or harassing someone, please flag this content as inappropriate. We encourage different opinions, respectfully presented, as an exercise in free speech.
NYC Lab Middle School

We need to switch to renewable sources of energy if we want to survive, and thrive, in 2050 and beyond.

Gun violence is a problem in our country. Innocent people are being murdered and they have the right to live their lives as long as everyone else.

Sexual assault is something that needs a more serious punishment. The person who is getting arrested for sexual assault on average only spends a ye...

How the U.S. can help put an end to terrorism.

Are Guns Controlling Us?

With the amount of gun violence on the rise, it is important that we make an effort to protect our citizens.

Minimum wage should decrease for the fast food workers

Gun Control is a very controversial topic in the US. There have been many recent mass shootings, riots, and more. If there are laws put in place th...