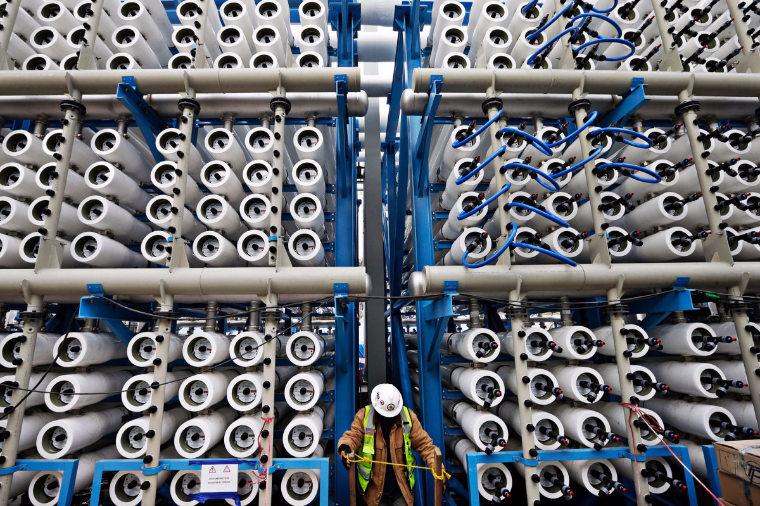 Image by Gregory Bull at www.newyorker.com

Desalination is important for our nation’s well-being because of the droughts that California and other states are facing. With water being a major necessity for life, a lack of it can affect agriculture and lead to famine and thirst. Because of this, the idea of using reverse osmosis for desalination has been seen as a viable solution for the water crises of our time. However, people have identified multiple economic and environmental problems with this. Desalination may be beneficial in solving drought problems, but alternative methods of this process should be used to protect the economy and ocean life. Thus, Future President, I am excited to present you with ideas that can make this process less expensive and more environmentally friendly.

Water crises are prevalent in California and the Southwest due to changes in rainfall patterns. A CNN article by Thom Patterson says, “ The region has been suffering for 11 of the past 14 years, according to NASA, directly affecting more than 64 million people.” Due to a lack of snow and precipitation, agriculture has been affected. With agriculture being a main source of revenue for California, shortages in produce can cause the economy to falter and lead to food shortages. Also Mark Lambert, CEO of a water treatment firm called IDE Americans, says, “There’s 1,000 people a day moving into Texas and there just won’t be enough water unless we do something about creating new resources.” With more people moving into Texas, there is a rise in demand for water usage which means that not everyone’s need is going to be met. To replenish the water supply, Southwestern states and California are considering desalinating seawater and “brackish” underground water. Using reverse osmosis backed up by research, desalination plants in Tampa Bay are able to create 25 million gallons of fresh water daily. With this great of an input, other states like Texas and California are considering desalination in solving water needs.

However, there are issues with the construction of desalination plants. First, it is expensive to build and maintain a desalination facility. It costs $1 billion to create a desalinating plant in San Diego which is very costly to a community. Opponents of desalination also say that the brine left over from the process can harm animals and plants that come in contact with it. Opponents also argued that the over usage of electricity is costly and could lead to greenhouse gas emissions in the environment. In consideration of these arguments, allow me to present solutions that can improve the efficiency of desalination.

One solution is producing sodium bicarbonate for industrial applications. According to an article by Erica Gies in the Scientific American, Farid Benyahia, a Professor of Chemical Engineering at Qatar University, proposes an efficient way to deal with excess brine and CO2 by reducing the Solvay process into two steps. Using ammonia, he reacts CO2 with waste brine to create baking soda and ammonium chloride solution. Then he reacts the ammonium chloride with calcium oxide to produce calcium chloride and ammonia gas. Then the ammonia gas can be reused for the process again. This process is beneficial because the baking soda produced is beneficial for commercial use and marketing since baking soda has many uses including antacids, baking, and others. Also, the reuse of ammonia gas reduces the cost of the process, and Benyahia’s version of the Solvay process reduces the need for brine disposal by 100% with sodium bicarbonate, calcium chloride, and ammonia being reused. Also, the usage of pure CO2 makes the process less expensive than traditional flue gas from power plants. With desalination problems being solved in the Middle East using Benyahia’s process, this could be a solution for disposing of brine and saving the ocean environment while using excess CO2 in America.

Alternatives are also being looked at to replace the standard reverse osmosis as the usual desalinating procedure. According to an Yale Environment 360 article by Cheryl Katz, Israel has been using an alternative called “semi-batch” reverse osmosis that shrinks energy usage and amount of brine stuck in the membrane. Singapore and Germany have also been working on hybrid-thermal technology that can run on solar power. Usings solar, wind, and hydropower for desalination can reduce the risk of releasing greenhouse gas into the environment. Aaron Mandell, co-founder and chairman of Water FX, started using parabolic mirrors to concentrate the solar energy into evaporating water and leaving solids. Through this process 14,000 gallons of water are produced daily which helps farmers with irrigation and agriculture in California. Useful chemicals can also be extracted from brine for commercial uses like cleaning products. Meanwhile, the U.K., Saudi Arabia, and North Korea are looking at creating one atom thick, perforated graphene membranes which can cut reverse osmosis desalination to a fraction of the cost. However, scientists are still trying to figure out how to mass produce these membranes.

Future President, with droughts happening in Southwestern states and the agriculture being affected, steps must be taken to make sure that water needs are provided for. Water is a key necessity for life, and without it people are facing thirst and famine or are using contaminated water which can lead to serious illnesses. With the number of solutions that have been offered, I would appreciate if you and scientists can look into these options to making desalination more effective for our nation’s well-being and national security. With multiples issues being identified with desalination, I would like to see the process becoming more efficient so that needs of people are being met while the environment is safe. Desalination could possibly become the future of obtaining fresh water. Future President, will you join me in improving desalination for the betterment of the American people?

desalination environment
Published on Oct 31, 2016
Report a problem... When should you flag content? If the user is making personal attacks, using profanity or harassing someone, please flag this content as inappropriate. We encourage different opinions, respectfully presented, as an exercise in free speech.
Avondale High School

Gun violence is an important issue that impacts people all around the world.

Hello, I am a student at Dobbs Ferry Middle School. My name is Louis Albanese and I really care about our planet being fine and intact for the f...