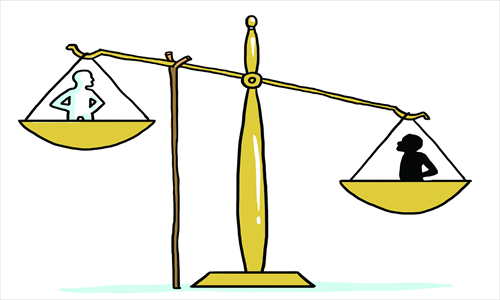 Anyone who thinks of America, they think of a diverse country where everyone accepts each other. Well, that seems like it's becoming a false statement. Racial inequality is becoming a huge problem in today's economy and it needs to be solved.

Now, while while racial inequality is still a big problem in our world, it's also sort of improving. A lot of our schools are no longer segregated and more and more non-white people are getting jobs and earning a living. But these improvements seem very minor considering all of the other racial issues.

I would like to conclude by saying that racial inequality can be solved. I suggest that all people of all races should get equal amount of pay and that we should desegregate more schools and give colored people a better chance at life because everyone is equal. You are one of the few people who can do something about this rising issue and maybe even stop it once and for all.

discrimination
Published on Nov 8, 2016
Report a problem... When should you flag content? If the user is making personal attacks, using profanity or harassing someone, please flag this content as inappropriate. We encourage different opinions, respectfully presented, as an exercise in free speech.
Avondale High School

Although building up these war torn nations may be difficult or may even seem impossible, creating a more peaceful world, where no nation feels the...

Students in high school and middle school should be provided at least a 30 minute recess break throughout the school day in order to help with ment...

Sex Trafficking in the United States

The business of sexual exploitation of children and women is thriving within our country, and we cannot let it go on any longer.

I'm Lula Gebrengus. I'm 14 years old, and I'm worried about the animals in the world because they're being abused by their owners just for the fun ...

Public Skateparks Are a Must

This is a paper that explains why there should be a public skate park that everyone can skate at.

In this letter, I assert that more states should pass transgender bathrooms policies.

Racial injustice is a major issue.