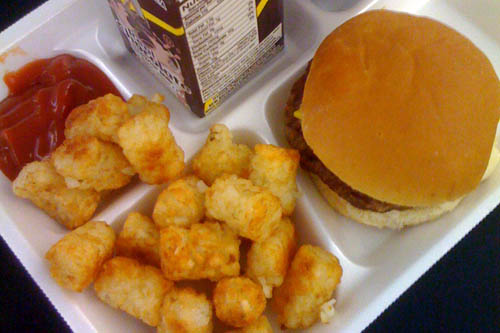 The school lunches that we were promised were healthy and still filled our stomachs everyday to make us the healthiest generation of kids. Most of the school lunches served today if not unhealthy then tastes like cardboard and is extremely disgusting to look at. If anything the school lunches should be at least healthy even if the only thing they serve is salads and protein and limited amounts of fat for each student.

According to Maria Godoy’s project on school lunches that she made to feature more than 7000 school lunch photos, she gathered information that some schools put “mystery meat” in their lunch at school. The mystery meat was revealed as a form of ground beef that almost looks like a bunch of slop mixed together and put in their lunches. This both is unhealthy and disgusting to look at.

Things such as mystery meat shouldn’t even be a thing in school lunches, kids deserve to have a lunch at school that they should at least like without second guessing it. It’s food after all why should kids be worried about what they eat at school.

In Carly Schunas research on School lunches she researched the health effects of school lunches, one of the effects included mental effects. She found that test scores after poorly cooked and fried lunches led to lower test scores. Literally the main reason why kids are supposed to be in school is to learn and to create a future for themselves. How is that supposed to happen if something like a school lunch is bringing them down from achieving a higher GPA?

Although, there are some schools in the USA that still have quality lunches for their students, so this message might not be addressed to everyone. But, that doesn’t mean that it isn’t still happening on schools across the map. Each and every single school deserves to have a quality lunch for their kids to help them grow.

School lunches need to fixed, kids shouldn’t have to eat something at school that is unhealthy for them especially when it actually is effecting their health not just physically but mentally as well. School lunches today should be manufactured to be suitable for kids to live a healthy life for their careers to get better jobs and achieve their dream.

education food students mental health
Published on Oct 31, 2016
Report a problem... When should you flag content? If the user is making personal attacks, using profanity or harassing someone, please flag this content as inappropriate. We encourage different opinions, respectfully presented, as an exercise in free speech.
Avondale High School

Dear Madam/Sir, I address this letter to the future president of America. This Letter Is about all the Illegal Immigrants in the United States. Ill...

Legalizing marijuana will do far more than allow recreational drug use… it could saves lives, or at least make the short remainder of them signific...

GMOs are genetically modified organisms. They are highly toxic and detrimental to the human health. This letter analyzes how GMOs are not beneficia...

Cost less money to go places, and helps you with life problems.