Did you ever dream of yourself in the White House sitting on the president's chair solving the United States problems? Students are dreaming of themselves being in a office checking the rate of their patient's heart with a stethoscope or in a classroom teaching students with textbooks so they can pursue their dreams. Every year the college tuition is increasing and increasing, so in 2015 only about 63% of graduated high school students went to college. So, why aren’t the other 37% of student attending college?

Every year the majority of high school students are stressed over getting a scholarship for college because they don't have enough money to pay for four years about $37,640 just to learn so they can follow their dreams that they have been planning since they were children. Since the college tuition is increasing every year that means less students are going to be able to pay for college so then there won't be a lot of jobs. In 2015 and 2016 the average cost for a college tuition in the Unites States for only one school year is, $32,405 for private colleges, $9,410 for state residents at public colleges, and $23,893 for out-of-state residents attending public universities. 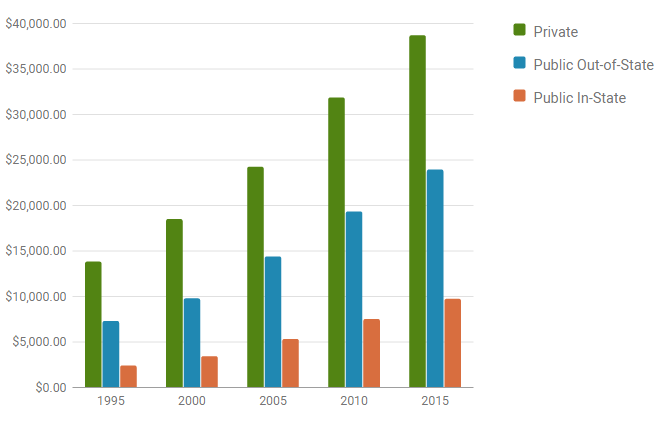 Education Costs economy college
Published on Oct 7, 2016
Report a problem... When should you flag content? If the user is making personal attacks, using profanity or harassing someone, please flag this content as inappropriate. We encourage different opinions, respectfully presented, as an exercise in free speech.
Mendez Fundamental Intermediate School

Looking into a Better Future!

Too Much Gun Violence In America

There's been many shootings at many places where there is terrorists attacks, but we should make a law. A law where there should be a policy.

College tuition costs should be lowered.

Why abolish standardized testing and common core? why not just fix the problems and go on with our lives. Could getting rid of these hurt the U.S. ...

Are college students money machines? Do they go to college for education or to pay off their college tuition debts? Is going to a good college real...