Do you care about the future? The quality of the Earth and life for our future generations? Well if you do, this is what you will need to know. First of all, pollution is when harmful substances get into our water, air, or land, and are no longer healthy for living things. We are going to focus on where pollution comes from, it’s effect, and how we can prevent pollution.

Discovery Education and Britannica reported that air is a natural resource and it is crucial to the planet and for all living organisms. Air pollution is natural and man-made substances in the air. Our air is primarily of nitrogen and oxygen—78 percent and 21 percent respectively, by volume. The remaining 1 percent is a mixture of other gases, mostly argon, along with very small amounts of carbon dioxide, methane, hydrogen, helium, and more. Gaseous air pollution are a primary concern. These include sulfur dioxide, nitrogen dioxide, and carbon monoxide. These are emitted from burning fossil fuels, such as oil, gasoline, and natural gas. Ozone is also a gaseous pollutant. These are created by power plants, automobiles, and other combustion sources which then are formed in the atmosphere by chemical reactions occurring between nitrogen dioxide and various volatile organic compounds. Airborne particles that are smaller than 10 micrometers are extremely harmful to a our health and can be deadly. They are emitted by industrial processes, such as coal- or oil-burning power plants, residential heating systems, and automobiles. Lead fumes are also a very toxic pollutant. Most of these are emitted in industrialized countries at very high rates. Lead is the only one of these pollutants that is not found too commonly. Ozone is directly discharged into the atmosphere from a variety of sources.

All of these factors are killing the Earth and humans, so let's do something about them. These are some main effects pollution has on the Earth and its living organisms. When we cut down trees, build more power plants, and expand the concrete jungle, we are just deducting the amount of oxygen, and creating more hazardous substances in the air. When we do this, we are literally creating an extinction date for ourselves, and it is coming sooner than we may expect. Air pollution is a major threat to trees as well. This is because the poisonous gases we create can weaken some trees making them more susceptible to diseases. Air pollution will also raise the average temperature of the Earth's climate by 4 degrees till the year 2050. This will have a dramatic effect on deciduous forests because some species of trees can not survive in this type of weather. Air pollution also creates acid rain. Acid rain is formed when polluted gas mixes with condensation and falls back down to the Earth. Then, the acid rain proceeds as run off or just falls into large bodies of water, and pollutes them. This creates a hazardous water supply that endangers the life of any organism that lives in or drinks this water. Pollution also gathers in the air causing a brownish haze called smog. This smog gets into our body and can cause serious health problems for us. In nature, there are natural filters but they don't work to the capacity we need them to because we produce so much polluted air, according to Discovery Education. These are the effects of our selfish choices. What will you do to to fix them?

Here are some actions we can take to prevent air pollution. As Teen ink wrote, industrialized companies need to deduct the amount of sulfur dioxide, smoke, and smog that they are depositing in the air to improve people’s health. Another way to prevent air pollution is by creating ads, and advertising them nationally. This will raise awareness about how big of an issue air pollution really is. A third way to stop air pollution is by shutting down power plants that exceed air pollution limits, or ones that are producing the majority of the pollution. Also, we can use an alternative to these polluters, such as solar panels, walking/ running/ or biking more places, and by buying/ creating more fuel efficient cars. Air pollution not only harms humans and animals, but it also affects plants too. So are you up to changing our world for the survival of the future?

In conclusion, air pollution is not a subject to take lightly. It harms humans, animals, plants and the environment. The less people know about air pollution, the bigger the issue becomes. So you need to make air pollution a known problem, and inform people of its major effect on our Earth. Then, you need to come up with a clear plan on how to reduce gaseous emissions, and instruct the country to take action. There are many ways we can take action to save the Earth and our future generation, but the real question is are you up for the job, President? 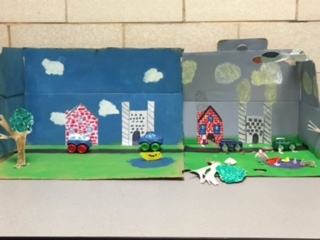 pollution environment
Published on Oct 27, 2016
Report a problem... When should you flag content? If the user is making personal attacks, using profanity or harassing someone, please flag this content as inappropriate. We encourage different opinions, respectfully presented, as an exercise in free speech.
Wake Young Women's Leadership Academy

Earth's reefs are dying and everyone needs to do their part to save them.