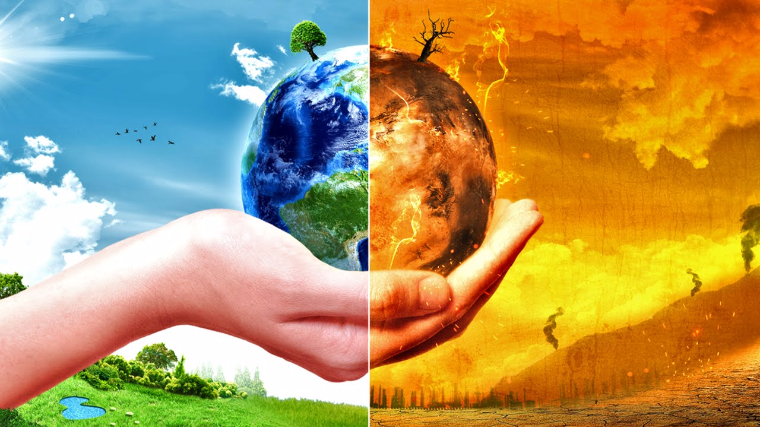 The Great Barrier Reef is known for its beauty. Colorful corals, exotic fish, and now, dead areas with bleached coral. Recent temperature increases and higher ocean acidity levels are killing the coral and making it hard for new corals to grow (Howard). The Great Barrier Reef is dying, and it is dying because of climate change. Climate change is a serious, human-caused issue, and it needs to be stopped before it wrecks even more havoc on the world’s environment.

Climate change impacts the environment in many negative ways, including the weather. Because of climate change, weather is more extreme. For all of 2015, California suffered from drought caused by lack of rainfall (“Billion-Dollar Weather”). This drought resulted in decreased agricultural productivity and increased risk of forest fires (“Billion-Dollar Weather”). Longer, more intense periods of drought link to climate change, because temperature rise causes bodies of water to evaporate and changes patterns of precipitation (“Understanding the Link”). In February 2015, a large winter storm and cold wave impacted many central, eastern, and northeastern states, causing billions of dollars worth of damage in Massachusetts alone (“Billion-Dollar Weather”). Climate change can cause more intense winter storms because warmer temperatures cause more water to evaporate into the air, and this moisture-full air can produce more intense precipitation if the temperatures are below freezing (“Understanding the Link”). Climate change is also raising the sea levels globally. Because of the increased temperatures worldwide, the ocean’s water is expanding. According to National Geographic, “About half of the past century's rise in sea level is attributable to warmer oceans simply occupying more space” (“Sea Level Rise”). On top of that, ice caps and glaciers are melting and raising the ocean levels due to displacement (“Sea Level Rise”). Over the past 20 years, sea levels have risen an average of 0.13 inches per year- near twice the average speed of the 80 years before that (“Sea Level Rise”).

Human greenhouse gas emissions are the main cause of global climate change, but regulations intending to reduce emissions are met with controversy. Humans are primarily responsible for climate change due to the large quantities of carbon dioxide (CO2) emitted from energy production. According to ProCon.org, “CO2 produced by burning fossil fuels such as oil and coal can be differentiated in the atmosphere from natural CO2 due to its specific isotopic ratio” (“Climate Change ProCon.org”). This specific human-caused CO2 is the cause of the rising greenhouse gas levels in the atmosphere. CO2 and other greenhouse gas emissions did not begin to increase rapidly until the 20th century, attributing humans as the cause for the higher atmospheric content of greenhouse gasses (Shaftel). Even though the cause of these emissions and resulting climate change seems apparent, many actions and regulations taken to prevent higher greenhouse gas emissions are controversial, and few come into action. Take, for example, an initiative proposed by the Obama Administration, which would require states to submit a plan that describes how they will reduce emissions from their power plants (“2016's Top Legislative”). This regulation intends to lower carbon dioxide emissions from power plants by over 30 percent (“2016's Top Legislative”). Actions such as these are vital to reducing greenhouse gas emissions. However, this new rule has been controversial for many states, who are fighting the regulation in court.

Some people disagree with these regulations because they believe that climate change is not occurring. They think that the natural fluctuations of the earth and sun, not humans, are what cause global temperature increase. However, 97 percent of climatologists agree that human activities are most likely the cause of climate change over past century (Shaftel). Natural temperature fluctuations have never before been as dramatic as they are now. Scientific data from tree rings and ice cores shows that the increase in temperature of the earth over the past decade has occurred more rapidly than any other period of temperature increase from the last millennium (“Climate Change ProCon.org”).

There are already many proposed solutions to slow and stop global climate change. A major part of preventing the increase of climate change is reducing greenhouse gas emissions. The United States can do this by using better, more efficient sources of energy, and by using energy wisely. A study in 2012 from Lawrence Livermore National found that the United States is only 39 percent energy efficient (“Spooky Statistics”). This means that the US wastes at least 61 percent of the energy it generates. Teaching citizens and businesses more efficient ways to use energy could increase the energy efficiency of the United States. Switching to renewable sources of energy can also reduce greenhouse gas emissions. Already, there are many sources of renewable energy in use, such as wind turbines and solar power plants. Stanford University Professor Mark Z. Jacobson claims that “Placing planet Earth on a strict diet—100 percent renewable energy—can be done by 2050, without the need for radically new technology” (Brennan). Switching to renewable sources of energy will greatly reduce greenhouse gas emissions, which will in turn slow, and eventually stop global climate change. To encourage more efficient use of energy, the United States can apply incentives, much like the incentives given to California residents to encourage efficient water use. California passed a bill in September 2016 to fine water suppliers in California who waste excessive amounts of water (Stevens). Bills such as these can be applied to power plants and energy suppliers to encourage more efficient production and use of energy. Incentives to encourage more efficient use of energy can extend to the citizens of the United States by offering free or reduced price energy-saving appliances, such as Compact Florescent Lightbulbs, to those who want them.

Climate change is a serious issue and will increase in seriousness as it progresses. Actions against climate change have been met with controversy and opposition, but measures that will decrease greenhouse gas emissions and increase energy efficiency are a requirement for stopping climate change. The people of the United States need to learn how they are causing global climate change, and the best ways to efficiently slow productions of greenhouse gas emissions. If citizens cannot learn this, then the consequences for their actions have the potential to change the world as we know it- and not for the better.

Energy greenhouse gasses environment marine life climate change
Published on Oct 23, 2016
Report a problem... When should you flag content? If the user is making personal attacks, using profanity or harassing someone, please flag this content as inappropriate. We encourage different opinions, respectfully presented, as an exercise in free speech.
Orange High School

Dear future president, The Earth is the only place we have to live, and I don’t think we are taking the best care we should take to our only pl...

Is Our Education Good Enough?

Lots of kids today are very fortunate and can acquire lots of things, although others aren't. Some kids in the United States of America can't get ...