Congratulations on your successful campaign efforts, all of America is counting on your ability to run this government. The next four years will ask of you to promote peace and prosperity to our country’s citizens, while retaining a sense of practicality in your decision making, which will concern social progression, economic stability, peace for our own people and our foreign neighbors. By neighbors, I imply all 196 countries of the Earth, those that must maintain a common relation with the United States, those that we share the planet with. As history has conveyed, the U.S. has used its superiority as an international power, to protect other nations. Today is the day that you must use this power to bring peace and prosperity to all of the citizens of earth.

No dilemma has ever plagued humanity wholistically; throughout history we have faced disagreements between different idealisms, because there are always differing opinions to each campaign, opinions based on a religion, ethnic background, political view, or financial bearing. Where now, a conceivably calamitous war thunders, where few choose to take notice and even fewer take action. Every repercussion of our ignorance is felt as a convulsion of Mother Earth, a convulsion felt by all men, women, Christians, Muslims, Buddhists, Asians, Africans, Europeans,right-wings, left-wings, the poor, and the rich. Eight-billion people on this planet have the power to kindle change, and it is now time to address the single greatest obstacle of the twenty-first century: the environmental crisis.

Both 20 century and contemporary scientists have proved that climate change is becoming exponentially more life threatening everyday. Our idiocy has allowed procrastination, to continue to the point of irreversibility, which is undoubtedly an imminent threat. This threat represents the difference between conservation and extreme adaptation, between life and death. The danger signs of the Earth’s ecosystem are apparent and fathomed by some, but only under a leader that turns attention into cooperation and success, can we succeed in this task. The world is scrounging for a such a leader, and you having proved your ability to construct unity, and therefore need to make it your concern to provide our planet the remedy that it desires. Regardless of opposing beliefs, the Earth has granted us a place to reside and elements to thrive under. Would it not be of our disgrace to treat the beauty of this temple with such negligence? Every man or women can rouse the memory of experiencing the sea, a forest, layers of sand, or the scent of a meadow. Every entity has a raw and boundless connection to the wisdom that hides under bark and ground. It is our duty to support such amidst expediency, our duty might halt social progression or the growth of the economy, but we must know it is to preserve our necessities, preserve the planet that gives society and an economy a place to exist in the first place. How is it we are to survive when we lack clean air, biodiversity, and polar ice caps? Would our cars and material objects outweigh the importance of clean water and an unharmed planet? Why is it that we need our wants, and simply ignore our needs? The progression of our society has created a naive generation of innocence. Most of us cannot fathom death, and being so, we choose to sweep the topic of global warming under the rug; the earth cannot die, we can’t die… In a world with advancing medicine, security, and other technology, we continue to subsist—unable to use these advancements as ways of saving what we have left of nature.

Nearly twenty-five million years ago, a coral basin developed just off the shore of Queensland Australia. Today we know of this as the Great Barrier Reef: the largest living ecosystem on the planet, considered by many one of the wonders of the world. In summation, the Great Barrier Reef is the largest and most bio-diverse habitat to over a thousand species on this planet, and it is dying. The past year, the acidity and temperature of the ocean have reached shocking numbers, due to the increased emission of carbon dioxide gases. In March, the increased acidity caused coral bleaching and killed off around half of the reefs off of the north east coast of Australia. It is difficult to say whether any of these reefs can be resurrected, but the death of the Great Barrier Reef is evidently inevitable as of now. It represents a precursor to what will transpire next if we don’t address the issues of fossil fuel emissions.

With endangered species at an all time high, the polar ice caps melting at an alarming rate, and the atmosphere having reached 400 parts per million of CO2 in our atmosphere, it is clear that the Great Barrier Reef is not our only problem. It is time to take action, fund environmental programs, and pass reforms that will save the planet. The ignorance of big business leaves the green campaign to a few individuals. We as the few are pleading for action, pleading for preservation, pleading for life, and a future. What is a life for our children if we leave them with the arduous project of resurrecting the planet. Our job today, is to make a mark on the future, by saving what we have; we want our children to thank us for our hard work, not resent us for our negligence. It’s time to ask yourself: would you prefer your administration live with honor, or infamy? 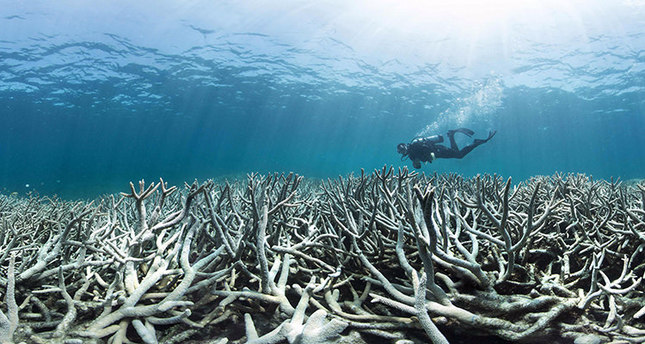 global warming environment
Published on Nov 1, 2016
Report a problem... When should you flag content? If the user is making personal attacks, using profanity or harassing someone, please flag this content as inappropriate. We encourage different opinions, respectfully presented, as an exercise in free speech.
Clarkston Community Schools

Resistance to the "Melting Pot" Theory

Why is everyone so ignorant?

Our public education system is too focused on objective-based learning and it is causing the People of the United States to become more ignorant an...

Our future as a nation looks bright, but in other ways, bleak. While we have chosen progressive stances on a number of issues, Islamophobia is incr...

How to take a realistic look at the state of our climate and how to address it in a realistic political view.

Standardized testing is demolishing the individualism of our students in public education. It's time for a new "standard".

This letter is about how there is too much animal abuse.

The problems in our environment are bigger than they seem.

CCD and its effect on us.

Our world today is majorly affected by pollination, yet in the future we could see a decline in bees and the many things that bees pollinate and pr...