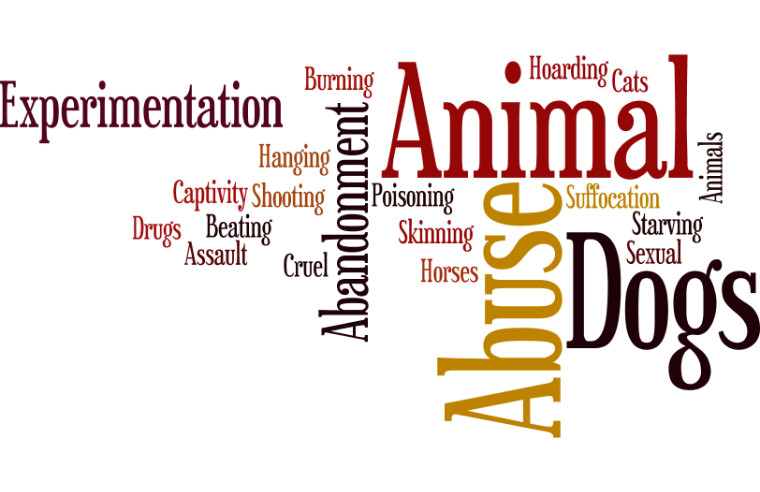 Did you know that only 1,920 animal abuse cases are presented by the media a year, not even including cruel experimentation in labs. Sadly animal abuse is an unpopular yet serious problem in the US that needs to be recognized. Almost 10 million animals die from animal abuse each year just in the US. Sixty percent of those animals include dogs, 18% involve cats, and 22% involve other animals. According to the ASPCA, twenty six percent of the sixty percent of dogs are pit bulls. On top of that, the ASPCA also reported that 100 million animals die from experimentation in labs each year. These animals include rats, mice, cats, rabbits, monkeys, and other animals. The worst part is of these animals die from shooting, beating, suffocation, strangulation or choking, nine percent die from fighting, ten percent die from stabbing and mutilation or torture. Ten percent die from poisoning, 45% die from neglect, abandonment or hoarding, and 2% die from other ways of cruel treatment. Over 250,000 animals fall victim to neglect or abandonment a year and the person responsible rarely ever gets caught or arrested for what they've done. Our country needs you to step up and protect not only our people, but our pets as well.

I started to research multiple animal abuse cases on animals-abused.org and the results were quite disturbing. There were multiple accounts of embedded chains, disturbing accounts of torture and sudden abandonment. For example in Dallas Texas, a ten week old pit bull named Oogy was used for bait to a larger stronger pitbull in dog fights. When police found him he weighed 20 pounds and the left side of his face, including most of his ear was torn off. He had been bitten so hard that a piece of his jaw was crushed. Afterward he was thrown in a cage and left to bleed to death. The records from the ER have disappeared since the incident leaving the owners of Oogy clueless as to what happened to the pit bull, who was responsible, and where these fights took place. Another example is   small terrier puppy named Cinnamon. She was found tied to a tree with an embedded chain in her neck, an entanglement of chains between her legs preventing her from walking, her right ear was deformed permanently, several of her teeth were broken, there was a 2 inch deep wound in her neck from the chains. Nobody knows to this day who was responsible for this brutal crime or what exactly is the cause for her injuries. Luckily Cinnamon has healed up and is living in a safe home now. These are only two examples of what a lot of our animals suffer through in America.

Although we do have specific laws in the USA on this specific issue, most people have disregarded them, never heard of them, or do not read over them correctly. Animal Abuse laws are seen as the least important law and sadly this makes law enforcement very careless to these ideas compared to others. There have been a large number of laws passed about cruel experimentation on animals, treatment of animals in the food industry, and treatment of pets. Many people do not know these laws compared to the others they have learned about. According to the Animal Legal Defense Fund, in our country,  if you abuse an animal it is regularly treated as only misdemeanor or offense.

The United States Department of Agriculture has pointed out each law that has been set for animals. Like the Animal Welfare Act of 1966, this law requires that all animals in labs, animal handlers, transporters, and exhibitors must treat animals with care, kindness, and delicately. If you do not follow this act you can face fines or imprisonment. The Humane Methods of Slaughter Act of 1978, prohibits people in the food industry from treating the animals in cruel ways, keeping them in a harsh environment, and not giving them a quick painless death when it is their time to go. If you disobey this law you can be fined or imprisoned. These are just two laws that the US has passed and so many people do not know about them.

Your job as president is to protect your COUNTRY, not just people, not just animals, not just trees, anything in this country should be protected. Our animals may seem like they aren’t nearly as important, but they are. If anything they are stronger than us as humans. If a human went through what animals go through and they couldn’t speak up there would be so many more disputes and riots. What makes animals any different? Because their “smaller than us” or “wild animals that are unpredictable”. Human beings are considered animals, and to be honest how predictable is a human being? Somebody could easily decide that they wanted to go kill somebody and they would be considered a murderer. Why should that be any different from animals. If you insist on being our president you must work against all these crimes not just one. Don’t just ignore the man on animal crimes or the white on black crimes. We need you to step up and protect your people. What will you do as president to keep your country safe?

violence animal abuse animal abuse
Published on Nov 7, 2016
Report a problem... When should you flag content? If the user is making personal attacks, using profanity or harassing someone, please flag this content as inappropriate. We encourage different opinions, respectfully presented, as an exercise in free speech.
Wake Young Women's Leadership Academy

We need to stop using animals for human entertainment.

Livestock care in food corporations and how it affects us.