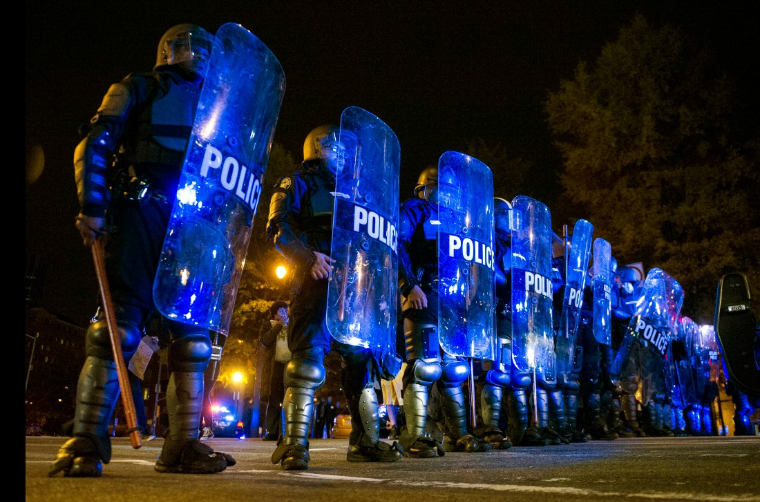 As you are well aware of, police brutality has sparked major controversy in the world, especially in the country you are currently attempting to unite. Police brutality is not some foreign war, but on your own doorstep, with hundreds of incidents each year, preventing the growth of the United States, and yet is still regarded as an issue found solely in history books.

If the news stories have not been enough, in Baltimore, a city where 63 percent of the citizens are African-American, the same group made up about 95 percent of those stopped by Baltimore police at least 10 times without citations, according to "Bias in Baltimore" on the Opposing Viewpoints database. However, specific anecdotes are crucial to understand the magnitude of this issue.

In Florida, specifically Miami, a behavioral specialist by the name of Charles Kinsey was attempting to help a man who was lying in the street blocking traffic. Kinsey can be seen with his hands up, but still gets shot in the leg. On the other hand, police often times do have a probable reason to use fire-power, whether it be a life-threatening situation, or something else. Even with this taken into account, the Huffington Post exemplified how police have been known to shoot 10, and even 20 times into victims without remorse.

Of course, the most notorious shootings occurred in Ferguson, Missouri, and Baltimore, along with several other cities. It is important to realize that these shootings caused outbursts across the nation which have led, unfortunately, to the injury and death of multiple police officers. The schism created by these atrocious events will ultimately precipitate enough disunity among the United States to a point where other nations will be able to divide us socially, economically, and ideologically.

In order to reset America on the right track, police should utilize one, or both of the following elements: better background screening, and body cameras. Cameras will evidently be used to see and hear the possible mistreatment of any police victims to allow for a better representation of evidence in court. With regards to background searches, a study found that police officers with a college education, rather than a high school diploma, are more likely to make logical decisions. Even so, these background searches could go so far as to include information on where that specific officer has lived. The search could possibly require the officer to provide numerous phone numbers the department calls before the officer is admitted.

One must realize, the problems caused by police shootings are not from the entire United States police force, but a few officers in the force who do not want to accept the phrase, "all men are created equal" by various leaders throughout history.

Andrew Jackson once said, "The planter, the farmer, the mechanic, and the laborer... form the great body of the people of the United States, they are the bone and sinew of the country men who love liberty and desire nothing but equal rights and equal laws". Each of these citizens are a cog in the machine that makes up the economy. For the machine to function properly, there should be equal protection for everyone, regardless of race. To close, police brutality is preventing the uniting of a nation, OUR nation. As Pauline Hanson put it, "To survive in peace and harmony, united and strong, we must have one people, one nation, one flag".

Illegal immigration needs to be stopped and regulated in the United States to decrease both overpopulation and crime rates.

College tuition is on the rise, destroying the drive of the future generation of America.

Some Injustices of Standardized Testing

Too many standardized tests are being put on students, and it stresses out not only that student but their teacher and quite possibly their school....

I am not a person with very political views. I come from a household where current events are not talked about around the dinner table. However, on...

Many judges these days are giving harsher or more lenient sentences based on the race, gender, sexuality, religion, or social class of the offender.

How schools should be.

School is a place for students to achieve their education, NOT a prison of stress and overwhelming work.

suicide in the world

lots of kids in middle and high school are commiting suicide

This letter brings attention to Human Trafficking and how bad it really is and how much it needs to be stopped.

Buying a gun should be made more difficult.

Police brutality is a big and glowing problem in the United States. We need a third party organization to watch over the Police Department.