Police brutality and lack of equality for people of color is the most important and devasting problem in the United States right now because people of color are being incarcerated and shot due to prejudice by police officers. To solve this catastrophe, something needs to be done to keep police from destroying the lives of innocent people. Future President,  you could train and hire police officers differently. Have your police officers wear body cameras at all time.

Micheal Brown Jr. Alton Sterling. Freddie Gray. Christian Taylor. Sandra Bland. Antmun Shumpert (Tupelo, MS). When will the killing from police officers ever stop? Will it stop when someone really famous is killed by one? Will you do something then? How will you protect everyone? What will you do if every black person just started a riot? Why aren't the police obeying the law?  “The police must obey the law while enforcing the law.” We all need answers to these question.

Now that the police officers have taken advantage of people who they are supposed to serve and protect, one is not only scared for their own life, but scared for their family lives also. For example all started in the year of 2013. I see all these hashtag black lives matter (#blacklivesmatter/#BLM) and a picture of a boy with a hoodie on , a bag of skittles and a Arizona Tea. So that next morning, I get on soical media and I hear something about “ A young black male last night has been shot and killed due to walking through a Caucasian neighborhood because he wasn’t from that neighborhood he was thought of as a threat,” said the news reporter. They said that Mr. George Zimmerman will be put on trial. Then, one day, my mom tells me “Guess what another young black male has been shot and killed by the police.” This took place in 2014, Michael Brown was shot and killed by Darren Wilson, 28 year old white Ferguson police officer.  Police officers are so called “highly trained” with fighting styles, yet they always have to draw their guns on an unarmed person… yeah, that makes a lot of sense.

Thank you for considering this matter. 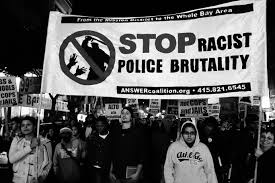 equality police brutality black lives matter justice
Published on Nov 8, 2016
Report a problem... When should you flag content? If the user is making personal attacks, using profanity or harassing someone, please flag this content as inappropriate. We encourage different opinions, respectfully presented, as an exercise in free speech.
Aberdeen High School

Why should or should not women have abortions.

Police Brutality has to stop

This letter explains the struggles of maintaining a family off of minimum wage and why it would be beneficial to families to raise it.

Sex education should be taken seriously. Many parents don't want their children to learn about sex but in fact students in sex ed. are more likely ...

Not all immigrants come to destroy. On many occasions, citizens have a stronger dislike for the dealings of the country than immigrants.

It most stop here!

Relationship of the people with law enforcement

The effects of white privilege on America today.

Police brutality is affecting the nation.