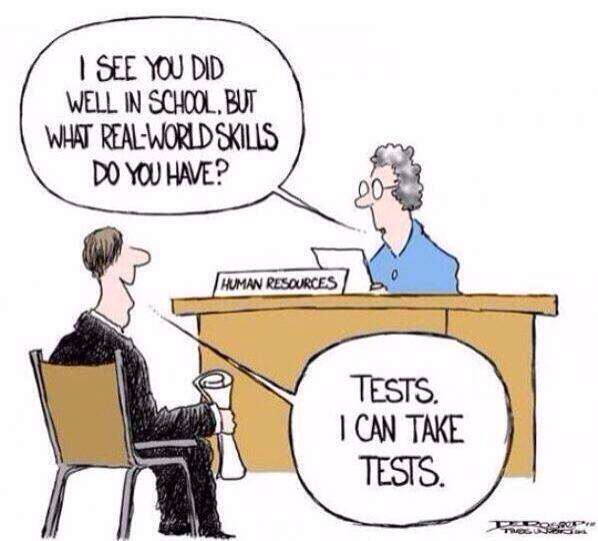 My name is Otto and I am a high school student in the state of California. I have taken a few standardized tests and would like to address how flawed they are. These standardized tests, along with other regular tests given in school, are supposed to evaluate or analyze a student’s understanding or strengths in an area. However, today these tests are made to be unfair to many individuals. They do not focus on a particular objective but instead narrow the thinking curriculum of students. I, myself, am not the only one who feels this way. Standardized testing is bad because it reduces student talents, hurts the economy, and is not the most viable choice when there are alternatives .

Excessive testing in general has been a hinderance in improving America’s ability to produce innovators and critical thinkers. The tests are made in a way to reduce thinking to the most simplistic type. According to education researcher Gerald W. Bracey, “standardized tests only measure a small portion of what makes education meaningful. The tests do not include creativity, critical thinking, or a sense of wonder”. A clear example is the multiple-choice format used on the standardized tests. I understand that the providers of the test are trying to measure the student’s quality of learning, but this format encourages students to have shallow thinking. This only promotes students to have two ways of thinking: that there are only “right” and “wrong” answers, which does not apply to real-life situations. If the students keep being tested, all they really achieve is the ability to take tests well. This is not actually productive to their future adult lives. Testing not only decreases the talents of students, but also causes them to face a decrease in creative thinking.

If students continue to be tested, it could be very damaging to the economy. Testing is expensive and continues to be a burden on state education budgets. Teachers as well students need to be paid for testing, which costs 1.7 billion dollars a year. The heavy taxes for each student from kindergarten to twelfth grade adds to the financial problems of the United States. Not only are people losing their capability to contribute to the economy due to not being able to advance in school that will eventually assist in their future jobs but the government continues to spend money on standardized tests. The testing industry is also known to make costly scoring errors in their feedback. As an example, in 2010 NCS Pearson, which is responsible for administering Florida’s testing, delivered the tests inaccurately and late. Why do we continue to spend money on standardized tests? There are other ways to measure a student’s potential.

Teachers are the most influential person in a student’s learning. Good teacher should not rely on tests to judge a student’s learning; instead, I propose that teachers communicate more frequently. Having teachers that analyze students’ weaknesses and provide help on areas that are not their forte will benefit students more. Each student is different and cannot easily conform to a narrow teaching curriculum. I suggest that schools lower the number of tests taken each year and replace it with something like a portfolio. The portfolio is a useful tool that has been able to aid in teachers inspection of a student’s strengths and weaknesses. Portfolios can also be a way for the student to reflect on their learning so far. Students can measure their learning through their achievements, which overall will lead to improved learning. Any engaging activities that measure performance prove to be more effective. Schools nationwide have already began to address this issue. An example of this are the independent schools in Kentucky. Teachers there use stealth assessing techniques such as video games that are made to educate. Teachers could collect the data and students would be more readily involved. These are only some of the ways I think getting rid of testing can make a lasting impact on the students’ learning.

I hope you read this and consider making changes to the the school testing system. Our school education system is failing, and I know for a fact that I am not the sole person who feels the need for change. Everyone learns differently and training everyone to be the same limits their capabilities.

change education economy
Published on Oct 6, 2016
Report a problem... When should you flag content? If the user is making personal attacks, using profanity or harassing someone, please flag this content as inappropriate. We encourage different opinions, respectfully presented, as an exercise in free speech.
San Marino High School

The Fight for Better Education

There needs to be better education in America for it is the generation of the future. Without good education, our country could go no where.

I believe that with the help of the next president of the United States we can all help to end the inequality between sexes as well as to stop the ...

Our education system is flawed and needs to be improved for the future of our country.