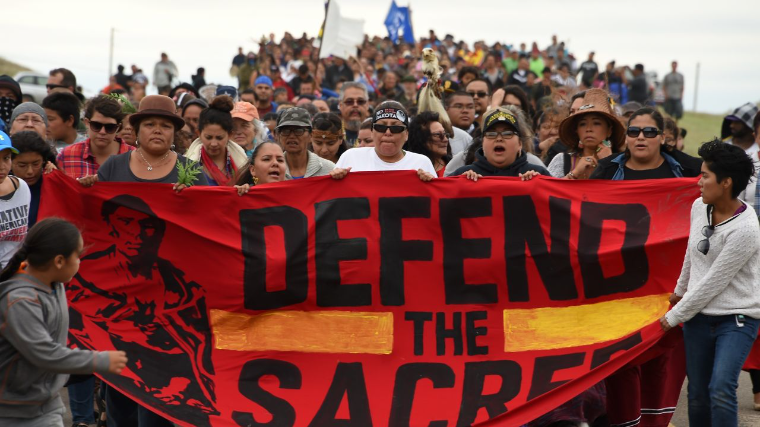 My name is Anna Gee, and I’m a San Marino High School senior.  I’d like you to know that for two years, Native Americans, environmentalists, and farmers have been opposing the Dakota Access Pipeline.  It is a crude oil pipeline that runs 1,172 miles through North Dakota, South Dakota, Iowa, and Illinois.  Its construction threatens lands of cultural significance, private property, and would result in dire environmental and monetary consequences if broken.

The Standing Rock Sioux Tribe in North Dakota has been protesting to block the pipeline from being built.  It has gathered support from a myriad of Native American tribes across the country.  Members of the tribe are furious the pipe will run through territory that has “significant cultural and historical value”, which includes burial grounds.  They believe it disturbs ancestral lands, ignores and violates past treaties, and is a danger to their water supply.  In addition, they find that mainstream media has not heavily covered the protests and the growing opposition.  This is where you come in.  They need help in finding coverage and investigation.  You need to help speak up for and with them and the land their identities are tied to.  National recognition is needed to highlight indigenous people’s rights and voices, which are too often pushed aside or denied.

Another group that opposes the Dakota Access Pipeline consists of environmentalists and farmers.  They are afraid the pipeline risks oil spills, which will threaten the safety of water sources and nearby ecosystems.  The pipeline is a fossil fuel infrastructure that only reinforces and encourages more consumption of a nonrenewable resource.  It increases U.S. dependence on oil.  Spills or climate impacts of this pipeline aren’t talked or reviewed about enough, especially with the general public.   The construction of this pipeline is an example of corporation interest prioritized over environmental ones.  Many farmers oppose it and also fear the environmental damage.  Some farmers in Iowa have gone to court to argue that the pipeline digging will damage the quality of the soil.

I am invested in this issue because I come from a family that knows what it’s like to live off the land, develop respect for it, and make many memories on it.  My family was raised on a farm, on which they made their living.  Their livelihood depended on the land.  They grew crops and raised animals, and essentially ran a business from that.  If one day, I looked out the kitchen window, and saw huge piles of dirt and construction vehicles clunking around instead of rolling green fields, I’d be angry.  It is heartbreaking to see honest, hardworking people have their homes disrupted and torn apart.  Imagine seeing machines plowing through your backyard and digging it up.  Imagine if something like the pipeline was built, and it broke.  The damage to my family’s identity and land would have been irreparable.

Work on the pipeline has been temporarily halted.  Only recently has more press coverage been directed towards this controversy, even though it has been fought against for much longer.  The pipeline company keeps pushing and believes it will get its pipeline down.  A great deal of construction is done, and they cannot just stop a multi-billion dollar project permanently.  However, you might be able to.  You can help increase awareness of the pipeline and all the issues it presents, at least offer your support to people who have been struggling without it for too long, and possibly cancel the Dakota Access Pipeline’s federal permits.

cultural preservation environment
Published on Oct 3, 2016
Report a problem... When should you flag content? If the user is making personal attacks, using profanity or harassing someone, please flag this content as inappropriate. We encourage different opinions, respectfully presented, as an exercise in free speech.
San Marino High School

How much is too much? Higher education costs putting your family under a financial strain.

Our public parks and environmental impact.

The Effects of Global Warming

Global Warming is a serious and growing problem in the United States.

Beauty programs shouldn't be allowed for the younger generations but more the adults who can understand who they are being and lettting themselves ...

EPA Must Make Companies Pay for Ruining Our Oceans

The Environmental Protection Agency is allowing some companies to dump waste into the ocean without any significant consequences or fines. This mus...