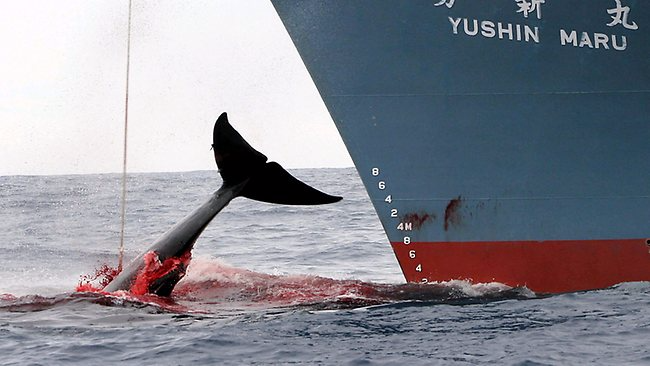 My name is Trevor Gautereaux and I'm a San Marino High School Senior. All my life I have been captivated by the power and grace of whales and I therefore get furious when I hear and/or read about their mistreatment. It's pathetic that we let various countries blatantly disobey the International Whaling Commission's ban against commercial whaling and it is equally pathetic that we allow whales to live in captivity. It's time to go to work and save the whales before it is too late.

In 1982 the International Whaling Commission realized that the excessive hunting of whales would lead to mass extinctions of various whale species so a ban on commercial whaling was set. Twelve years later they established the 11,800,000-square-mile Southern Ocean Whale Sanctuary. Despite those rules and regulation, Japan, Norway, and Iceland continue with their commercial whaling operations. It's time for you to confront these countries and stop these large scale massacres from taking place.

It is imperative that you, as the next president, lead the charge in this endeavor. As a nation, we need to think long term. We need to better this planet for future generations. Currently, we are bystanders just watching one of the smartest creatures on the Earth being killed under the guise of research. It is time to intervene. As the next president, I urge you to step in and use your powers of public persuasion to talk about this issue more. The American people are ready to stand by you. Let's take it a step further. Once the general public is on board, it's time to talk to the leaders of those countries that are whaling. Over the next 12 years, Japan plans to slaughter 4,000 Minke whales and that's ridiculous. We need to work with Japan to ensure their operations do not continue. We need to work with the IWC to ensure countries who are exploiting loopholes in the rules are punished and stopped. This is a global conflict that needs to stop and you need to lead the charge.

The mistreatment of whales is also a problem that plagues us here in the states. Whales being held in captivity is barbaric and cruel. It's so sad to see an animal as great as the whale be degraded to living in a swimming pool. The move needs to be made so this cannot continue. Over the past five years, there has been tremendous uproar against whales in captivity and it is time to capitalize on the nation's anger. Working to stop the captivity of whales should be a priority in saving this planet. The longer whales stay in captivity, the longer we will create an environment where it's okay to completely destroy a creature's life.

I have seen whales in the wild countless times but each and every time I see one, its a remarkable moment that I will remember forever. Weather its a local blue whale just off the coast or a newly born Humpback whale calf in Hawaii or an Orca up in the Vancouver area; seeing a whale in the wild creates a very personal and profound bond with nature. I don't want to live in a world where it's a common occurrence to see whales being killed in masses or where they live in captivity. Humans are destroying our planet and as the next president I urge you to take a stand. It's time to save and preserve instead of take and destroy.

environment
Published on Oct 3, 2016
Report a problem... When should you flag content? If the user is making personal attacks, using profanity or harassing someone, please flag this content as inappropriate. We encourage different opinions, respectfully presented, as an exercise in free speech.
San Marino High School

College, is it worth the money?

Judgement is a big problem, and can lead to people having lots of suicidal thoughts and they will become very sad. This stuff mostly happens when p...

Over Consumption, Waste and Damage to Our Environment

The United States is a wasteful country, arrogant in its consumption. Americans have too much material wealth, waste vital resources and, in the pr...

How America can work towards using more efficient energy that can help in cutting the energy waste and becoming more productive and efficient as a ...