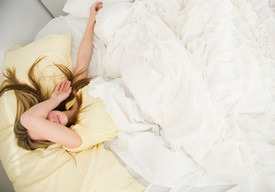 Beep Beep Beep! My alarms blares at 6:15 in the morning. I feel groggy and unreplenished, while I saunter, tiredly through my morning routine. Checking my phone for the time, I realize that it is already 8:05 am, with class starting in 5 minutes, I pack my siblings and myself into my car and speed to school. My name is McKala Downing, and I am a sophomore at Coon Rapids- Bayard High School. I am tired physically and figuratively of having to wake up at the crack of dawn just to go to school. Schools need to fix their schedules!

Everybody dreads having to wake up early in the morning, but teens are literally fighting their biological clocks in order to wake up in time. Needing to meet the recommended nine hours of sleep, teens will have to be in bed by nine o’clock just to wake up at six in the morning in order to get ready for school on time. This sounds easy enough, but unfortunately at adolescence, the body’s circadian rhythm is reset. Essentially teens will naturally go to bed later and wake up later in the day. This happens due to brain producing a sleep hormone, melatonin, later at night. This makes it virtually impossible to fall asleep at a necessary time and wake up with too little slumber. Night owl syndrome will then take over, where in which the student will be in a sleep induced haze throughout the day. Because of the lack of sleep, it wouldn’t be unusual for a teen to have a lack of attention and slacking grades. In order to combat this, school’s need to start later in the morning. I recommend they should start at nine o’clock. This time would be most ideal because teens on average fall asleep at eleven at night and need nine hours of sleep. They can wake up at eight and be at school by nine in the morning, refreshed and ready to go. If they do this, it would serve everybody some justice to get some extra z’s.

Some people might argue that it won’t matter once summer rolls around, because students can sleep in and stay up late till their hearts content. For children of low income families, they will unfortunately grow hungry, because during the school year they can afford the nutritious foods that they don’t get at home. Although their summer food programs do have good intentions on feeding these children, six out of seven kids who are eligible for the program don’t have access to a ride to get to the program. School food is affordable for low income families, but during the summer they end up spending more money on food. This can lead to low income children to grow hungry during the summer. If we switch our schedules to year round schools, these kids won’t be hungry throughout the summer.

Why do we have summer vacations in the first place? Most believe it’s because of the Agrarian Calendar, but farmers don’t do anything during the summer. The real reason we have it, is because during the time era where air conditioning didn’t exist; being inside during the summer was unbearable. Because of this, the rich pulled their kids out of school to go on a vacation and to avoid the sweltering heat of summer, thus schools followed suit. Summer vacations are pointless today because we now have air conditioning, but out of habit we continue to have summer vacation. This causes more harm than good because over the course of the summer, students lose month's worth of courses, also known as “The Summer Slide.” Although reading can fend off this deadly slope, low income families once again don’t have access to, or can’t afford these books. To avoid this, we should do year round schooling, where students will go for forty-five days and have a three school week break in between. That way, we’ll still have a 180 day school year while still withholding holiday vacations.

We need to fix our schedules, because with tired, hungry, and course lacking students, it’s no wonder the United states is ranked fourteenth out of forty countries in “cognitive skills and educational attainment.” Overall we need to focus on our most valuable resource, students, of whom are our future. If left unattended and unchanged, we’ll become a country of ignorance, of which leads to people unable to form their own opinions and lead them to follow one another blindly. We need to make a change and together we can make a better future.

school start times education
Published on Oct 21, 2016
Report a problem... When should you flag content? If the user is making personal attacks, using profanity or harassing someone, please flag this content as inappropriate. We encourage different opinions, respectfully presented, as an exercise in free speech.
Coon Rapids-Bayard

Lack of funds to schools

Schools are lacking funds, so the future president needs to speak out and push forward into helping schools in need of money.

I think that concussion protocol needs to be taken more seriously.

Immigration In the U.S

I think that the southern border should be more secure, but I also think that immigrants should be given more opportunities in the U.S.

Human trafficking is a big problem that happens all over the world that needs to be stopped.

Racism and how to handle it.

In Alaska, schools have a much harder time getting fresh food for lunches.

Give the Students a Say in Their Education

According to Edudemic, letting students choose the topic they want to learn about can cause less stress on a student and make them happier and more...

Change within the Education System

How would you feel about a series of events causing the Education System to be messed up, and still occurring to this moment?