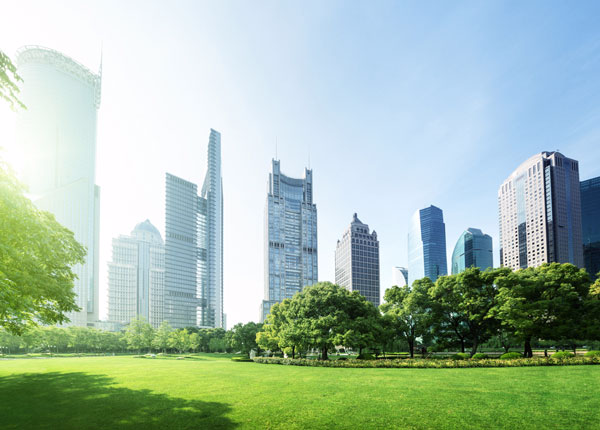 Can you imagine a city without any green space? A life and city so boring, that all you see is concrete, and the endless skyscrapers. Urban space may be limited, but cities need to find ways to create more green spaces. Green Spaces can help so many things like the psychology, environment, and even the economy of a city. Green space is an area of grass, trees, or other vegetation, used for recreation, or for aesthetic reasons.Green Space helps communities like mine, so why don't we expand them in populated urban areas? I don’t accept that cities only consume buildings, concrete, smoke and chaos, I believe that people live in cities, and that people need green space.

First, green areas are important to the psychology of a city. For many people who are residents of urban areas, it’s difficult to deal with such a chaotic place. The constant sounds of taxi cabs beeping, angry people yelling, sirens roaring, are all sounds that many city dwellers face every day. According to www.mentalhealthy.uk , a informative site foccusing on green space, states that “People’s stress levels are directly related to the amount of green space in their direct surroundings”. I think this new study is very important, because, green space is such a different environment from the gritty and trashy streets of cities. There is nothing that really evokes happiness in the city, so by having green space it will make people realize the importance of nature, calm them down, and most importantly a great alternative to get people’s mind straight during a stressful day in the city.

Another reason supporting my claim, is that green spaces are useful to the city environment. When you think of the most livable cities like New York, they have the famous Central Park. Central Park, as many other green spaces in cities, play a role into making the cities environment better. For instance, vegetation helps the air quality of such polluted cities. According to projectevergreen.org “One tree can remove 26 pounds of carbon dioxide from the atmosphere annually, equaling 11,000 miles of a car”. I think this point is important,because plants and trees will remove most pollutants from the air. In addition, green space will reduce energy. Also,vegetation can counter the warming effects of the concrete filled city. Lastly, green roofs on top of city hotspots will reduce Urban Heat Island (UHI). All these solutions may seem small, but it’s sure a huge step to making the cities environment.

Lastly, green space will also help urban economic growth. Studies show that property value certainly will increase if a house is near green space. The website, www.planning.org states that “"Thousands of people who have made the move to downtown Atlanta have chosen Centennial Olympic Park as their front yard." This source demonstrates the resident’s attraction to living in a green area. Therefore, as more people have the desire to live near green space in the city, like these residents, the market will continue to grow. As listed again in .www.planning.org “The desire to live near parks also translates into real dollars.” With cities growing by the minute, more people will want to cherish the beauty of the city.

Many may argue that cities are getting larger, and there is no room to fit green space. However, reality is people need their green space more than they need more buildings. Green space is beneficial in so many ways for cities, and it's vital that we have it. I am not saying that we should limit the increase of population in urban areas, I am saying that people want to recognize the natural beauty of a city. One way we can do that is by having more green space.

I can just imagine, cities all over the country, so beautiful, that green space isn’t the problem anymore. Families picnicking, kids laughing, and tall trees growing. Not just pretty cities in America, but stunning cities around the world. If we don’t take action to this, how are our cities going to grow? Green Space doesn’t just help our cities, it helps our economy, and a start to a better environment. Future President, what are your ideas of expanding green space into cities around the country?

economy environment green trees
Published on Nov 7, 2016
Report a problem... When should you flag content? If the user is making personal attacks, using profanity or harassing someone, please flag this content as inappropriate. We encourage different opinions, respectfully presented, as an exercise in free speech.
Brielle Elementary

Terrorism is the most important problem facing the United States.

I will talk about why in my opinion tablets are better then paper books.

The education system should be reformed.