It’s a warm, sunny August day, and my family and I enter the local seafood restaurant. The delicious scent of grilled seafood wafts through the air as we get seated at our table. The other customers are enjoying their scrumptious meals of fresh shrimp, flounder, scallops, lobster, or other creatures. In 2009, Americans consumed a total of 4.833 billion pounds of delicious seafood according to NOAA Fisheries. While these animals might be delicious to eat, a majority of the public is unaware of a particularly destructive method of fishing that is destroying our ocean ecosystem: bottom trawling. If we want to preserve our oceans, bottom trawling needs to be more strictly regulated.

Bottom trawling is an industrial fishing method where a large net with heavy weights is dragged along the seafloor. It is used to catch shrimp and bottom dwelling fish such as cod, sole, and flounder. Trawlers used to avoid sharp reefs and rocks because their nets would snag and rip. But with the introduction of rockhopper trawls in the 1980s, this changed. These trawls are equipped with large, heavy wheels or rollers that allow trawls to pass over rough terrain on the seafloor. According to the World Wildlife Fund, “The largest, with heavy rollers over 75 cm in diameter, are very powerful, capable of moving boulders weighing 25 tonnes. Now, most of the ocean floor can be trawled down to a depth of 2,000m.” This is exceedingly deeper than these types of trawls could ever go before. These trawls are now widespread, and they are extremely destructive.

As the wheeled trawl nets are dragged across the sea bottom, they disrupt, pick up, or destroy everything in their path. Trawls are particularly dangerous to fragile corals. Corals offer refuge and sustenance for tens of thousands of species of sea creatures. Killing corals presents a terrible threat to the ocean food chain and ecosystem and is one of the imperative reasons as to why trawling needs to stop. Trawling disrupts the seafloor so much, sediment trails left by it can be seen for miles from space. 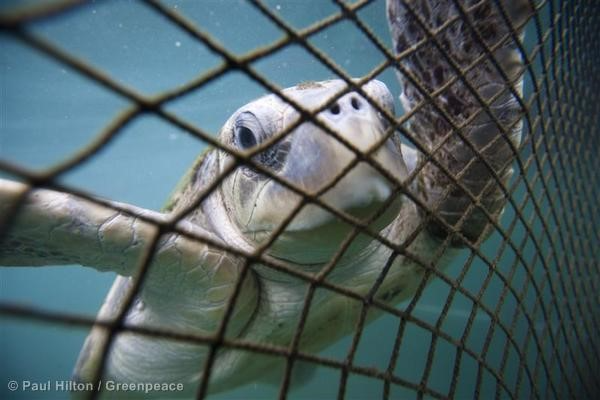 Trawling also kills sea life indiscriminately and unintentionally. Greenpeace International states, "Up to 90% of the catch in tropical shrimp trawling is thrown away". This amount of by-catch (or the unwanted fish and other marine creatures caught during commercial fishing for a different species) is astronomically high, considering fish caught in trawl nets are most likely dead or dying by the time they can be released. Trawled areas in the ocean can have only half as much biodiversity as non trawled areas. Destroying biodiversity in the oceans can lead to destruction of ecosystems not only in the water, but around the globe.

It may seem as though fishermen need to use bottom trawls to catch enough fish to sustain a living, but this is untrue. While the by-catch from trawlers is terrible for the environment, it also reduces fisherman's productivity because they have to take time to dispose of all of it. Fishermen can use various kinds of low-impact traps and lines to catch the same amount of fish, and drastically decreasing the amount of by-catch and habitat destruction.

Trawlers should be limited only to areas where it has been proven that the trawl will not have long lasting effects on the habitat, and the creatures will eventually recuperate. Even in these places, fishermen need to make efforts to reduce the impact the trawls have by changing the size of the gear to fit the area.

The creatures of the seas are amazing. There is more biodiversity in the ocean than any other place on Earth. If we continue fishing in destructive ways, the health of the oceans will plummet. Fisherman’s jobs will become harder and harder. The food chain will collapse. Future generations won’t be able to enjoy delicious seafood meals by the shore. To preserve the balance of the world, we need to end trawling.

trawling habitat destruction bycatch environment
Published on Nov 7, 2016
Report a problem... When should you flag content? If the user is making personal attacks, using profanity or harassing someone, please flag this content as inappropriate. We encourage different opinions, respectfully presented, as an exercise in free speech.
Brielle Elementary

Inequality Among Educations in America

Children who attend low-income schools are not getting equal educations.

"The Answer My Friend is Blown in the Wind"

It is essential we use wind energy to stop the harm of fossil fuel pollution.

Illegal immigration is a ongoing problem in the U.S that needs to stop

Everyone should be able to recycle because environmental importance, importance to people, and know the 3 R’s.