The law states that we’re all equal, but we minorities beg to differ. According to thesentencingproject.org, African-American males are six times more likely to be incarcerated than white males and 2.5 times more likely than Hispanic males. Racial inequality in the justice system is an issue we've always faced, but the issue is growing rapidly and spiraling out of control. To prevent having unqualified cops/ judges in the system, the president should make the qualifications for those positions, much higher than they already are.

An example of this injustice would usually be cops investigating cops in situations where police brutality/racial bias in court occurs, so officers usually don’t get much punishment or any at all. You should make a separate investigation team that only specializes in police brutality situations/ situations of unfair treatment in the criminal justice system. It is an effective way to make sure cases get handled properly and fairly. We don’t expect change to happen overnight, but if everyone comes together a change can slowly be made.

Despite the amount of people claiming that we have a fair justice system, minorities are treated incredibly unjust compared to whites. African-American and Hispanic people are more likely to receive longer sentences and are more likely to be in locked facilities, and so on, even when charged with the same offenses as whites. According to ACLU “Despite the fact that white and black people use drugs at similar rates, black people are jailed on drug charges 10 times more often than white people are.” A black man will face life in prison for a minor drug offense, while a white man is free after committing murder. How is that acceptable? It’s not, and something has to be done. Something will be done. Powerful groups such as the Black Lives Matter group are sticking up for these injustices. Furthermore, there is a program called The Sentencing Project that can help people link up with local advocacy efforts and join the fight to reform our criminal justice system. Across the nation, individuals and organizations are taking action to solve the issue of racial disparity, but its time for the system to catch up too.

The American Bar states that African Americans are being prosecuted for drug offenses far out of proportion to the degree that they use or sell drugs. In 2005, African Americans represented 14% of current drug users, yet they constituted 33.9% of persons arrested for a drug offense and 53% of persons sentenced to prison for a drug offense. How is that fair? This shows that minorities get sentenced for the slightest of offenses. 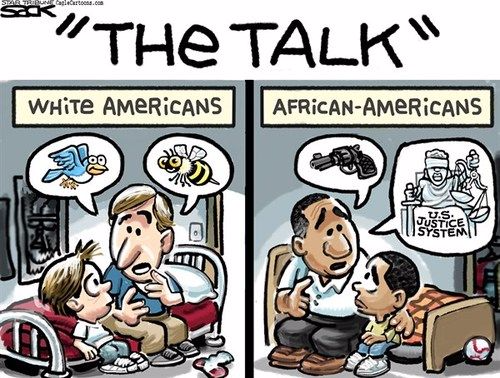 racial discrimination racial injustice criminal justice system inequalitiy
Published on Nov 6, 2016
Report a problem... When should you flag content? If the user is making personal attacks, using profanity or harassing someone, please flag this content as inappropriate. We encourage different opinions, respectfully presented, as an exercise in free speech.
Tenor High School

Mr/Mrs. President we should leave the police stations to sort out the supposed bias themselves, as they are taking action to solve any bias and let...

The Ever Increasing Cost of Knowledge

With the continued inflation of the price of college, fewer and fewer students are able to afford what's seen as a necessity in the workforce.

"Racial profiling has destroyed trust in today's policemen" for instance if a black male has an expepensive car some policemen will pull them over ...

The effects of mass incarceration in my neighborhood.

The Honorable Upcoming President Dear Mr. / Mrs. I am a resident of Miami, FL and I am writing to you in regards to a problem in my community whic...

My letter to the next President.