I am writing to you today about one of my concerns with our nation. As of this date, the Death Penalty is legal in 31 states, and illegal in 19 others. I am a firm believer that the Death Penalty should be a federally enforced law throughout all of our 50 states. Without a doubt in my mind, I believe that people who are crazy enough to murder someone, or rape/molest and take advantage upon someone; should be dead and gone right away, instead of slowly rotting in prison where it costs hundreds of thousands to maintain them.

I believe in the Death Penalty, but I believe there is a major flaw to the system. With the death penalty comes years and years waiting on Death Row. The average length of time from sentence to execution in 2015 was 17 years according to www.deathpenaltyinfo.org. It is much easier said than done, but as soon as the verdict is confirmed, the criminal should be executed within the month. It costs hundreds of thousands of dollars to hold someone in prison for their entire life, but it also costs thousands to maintain someone on death row.

Cost of the death penalty, is the main argument that appears with capital punishment. The argument is that while it costs thousands for someone to stay in prison for life, it costs even more to carry out an execution. This is the flaw that comes with the Death Penalty that I propose should be changed. With what I propose, the cost will be significantly less. The only reason that capital punishment is in fact more expensive, is due to the length of time on Death Row, and expenses of the trial.

The argument is also about the entirety of the case. This includes the price for an attorney, judge, appeals, petitions, and more. To simply hold someone in prison costs thousands and thousands of dollars - according to www.nbcrightnow.com approximately 31,000 per year! This cost be so simply avoided by a swift and quick execution that terminates the criminal immediately. The alternative to this, is letting the criminal sit in prison, make friends, and become comfortable, until eventually they fade off and die. This is unacceptable to accommodate and pay thousands of dollars for years and years to keep one alive, just so they can slowly and eventually die. The deed should be carried out right away, and the criminal should be put out efficiently and quickly to rid the world of one it has no use for.

There is no better way to deter one from committing crime than the idea of capital punishment. This is the single greatest fear among people; death. With this idea in their minds, it will greatly dissuade criminals from committing horrendous crimes. Capital Punishment needs to come into effect in all 50 states.

Greatly quicken the amount of time from sentence to execution

Enforce federally in all 50 states

I wish you the best of luck with your term in office. I am rooting for you, and for America. 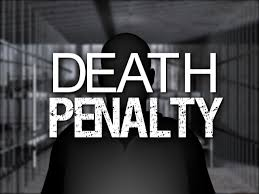 death penalty
Published on Nov 4, 2016
Report a problem... When should you flag content? If the user is making personal attacks, using profanity or harassing someone, please flag this content as inappropriate. We encourage different opinions, respectfully presented, as an exercise in free speech.
Wauwatosa West High School

You should consider decreasing the college tuition for students who want to attend college.

Why LGBT(lesbian, gay, bisexual, transgender) marriage should be legal in all states.

I do not believe that scientist should hurt the silent victims going through torture and being tested on to make our everyday products.

I hope that our future president can do something about These serious attacks.

I am against the death penalty. It is cruel punishment and we should not punish murder with murder.

Should we have the death penalty

My letter is about the death penalty on why we should not have it.

In the U.S. right now, criminals are on death row, awaiting execution. I'm here to explain on why the death penalty is wrong and unconstitutional, ...

The death penalty is a flawed system and should not be used in the United States.