Deportation has always been pretty controversial, yet some people can’t always clearly see why. Through history, immigrants have been the targets of discrimination, government abuse and divisive and inhumane immigration policies, according to aclu-wi.org. Executive Director Anthony D. Romero of ACLU of Wisconsin said: “we are saddened by calls from our governor and others to turn our backs on the world’s most .” This goes to show how crucial it is to reconsider how damaging deportation is. Also how dehumanizing it is for immigrants who live here. A lot of times immigrants are put in jail or taken to court but are not always criminally in the wrong, most times they’re sentenced due to merely just being a non-citizens.

When you deport someone, you have to think and see it through every aspect. If you deport a parent you have to think about the kids that are being left behind. Does a kid really deserve to be separated by their parents or have no other option but to leave the country that they are part of. Deporting a parent of a family is a really hard decision to make because either the kids go to a strange place where they don’t know anyone but yet they have to live and be there because they won’t have parents or they may even have to leave the country with their parents. And let's be honest who would wish this upon a child? Deporting parents will cause a destruction in families in every type of way.

Breaking up families is not easy, because having to break up families means that they might not see each other ever again. You have to think about it in every way you can, because having a family member deported means that we might not see them ever again because maybe on the other hand if the wife of a husband being deported is undocumented, she can't go with the husband because she is an immigrant as well. It makes every immigrant family seem like they have no voice in this country because if we speak or talk we might end up in a deadfall end up being deported as well. We need to stop deporting people who are innocent, or free of crime. We need to stop deporting those who are here just to pursue life, liberty and as well as the pursuit of happiness, just like any other person.

Although others will argue that some immigrants are criminals, I would argue that they’re humans just like you and me, and parents, grandparents, and so much more. Immigrants are dehumanized daily and so are their children. You are promoting another fatherless or motherless child by deporting parents, is that what we want? A society of broken families? We can solve this problem by considering the faults of deporting people. It is also easier said than done to deport immigrants, it can be costly and timely.

It is important to remember who we are as a nation and what we've become over the years, let us not call fall back to the old ways of this world but start a new. It's time to take a stand against deportation and the harmful effects it has on others. We must promote democracy and prohibit hypocrisy. We need to start appreciating the diversity and culture that immigrants bring. Having different cultures in a country allows others to learn new trades and ways of living. The United States is a country full of hope and dreams, we shouldn’t ruin anyones pursuit of happiness by separating them from their loved ones. Separating and deporting innocent families is something that has to stop. 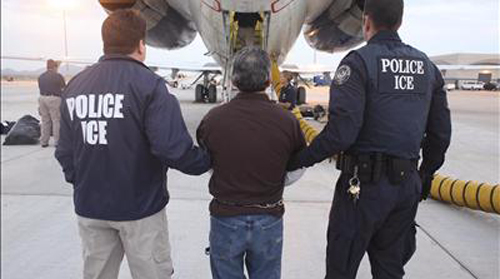 immigration deportation
Published on Nov 8, 2016
Report a problem... When should you flag content? If the user is making personal attacks, using profanity or harassing someone, please flag this content as inappropriate. We encourage different opinions, respectfully presented, as an exercise in free speech.
Tenor High School

Abortion Should be Illegal

I think we need to get rid of Obamacare

Immigration is not fair

Open Immigration Will Strengthen The US

The proposal is about immigration reform and how opening the US to immigration would greatly benefit us. It mentions what immigrants have done for ...

Out of Control: Illegal Immigrantion

What Happened to the word "Secure" in our country?

Let Syrian Refugees In The U.S

Judging someone based on their race, background, or religion, won't bring anything but hatred. The United States is a big country with a lot of opp...