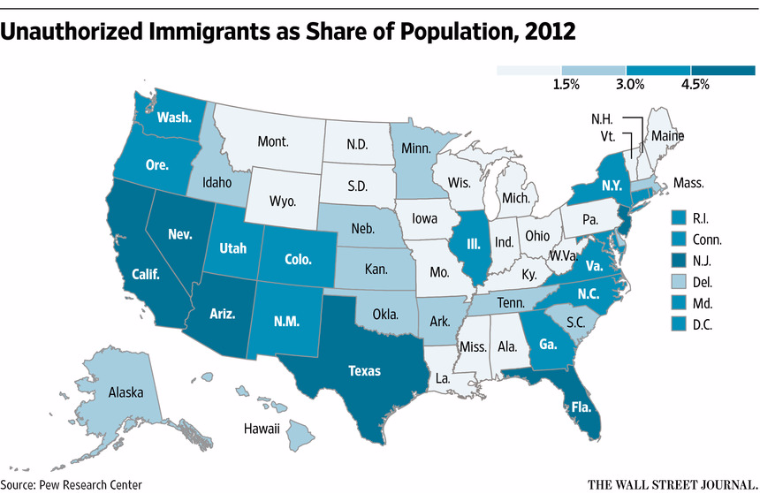 The topic of illegal immigrants is a big issue that needs to be addressed. In America right now, there are approximately 11.4 Million undocumented immigrants living in the US. They did not go through the legal process to make them a US citizen. “The United States Department of Homeland Security (DHS) has estimated that 11.4 million unauthorized immigrants lived in the United States in January 2012.”(CNN.com) “There were 177,960 undocumented immigrants deported last year who were convicted criminals, according to Immigration and Customs Enforcement and 121 people have been killed in the US by undocumented immigrants in the past 4 years according to CNN.com” That is 177,960 more crimes than we should have and 121 too many deaths. Just to think all of those could have been stopped is astounding.

There must be strict measures taken to prevent illegal immigrants from entering the US. "In the United States close to 700,000 new illegals enter the country each year and remain here." (CAIRCO) These are all people that probably wouldn’t pass the correct way to enter our country and therefore they should not be in. I also believe the next president has to be strict on making sure everyone in our country is a citizen. If they aren’t, correct measures need to be taken. “About 8.5 million jobs encumbered by illegal alien workers.”(FairUS.org) These are all jobs that could be done by most unemployed US citizens. If we had actual citizens in these jobs it would be a massive boost for the economy. The next president of the US must have very firm immigration laws.

Some may argue that all people should have the right to work and live where they want. In the US, there are way more and better employment opportunities that most other countries in the World. This being said I can understand why foreigners would want to come here. “When it comes to the top 10 national economies around the globe, the order may shift a bit, but the key players usually remain the same, and so does the name at the head of the list. The United States has been the world’s biggest economy since 1871.” (Investopedia.com) Because the US has such a strong economy, the amount of immigrants wanting to come here is incredibly high, and some of those people wouldn’t be allowed into the country legally, so they come in illegally. The want to come to the US is totally rational, but if you want to live in our country, you should have to come in the right way.

I believe that a strong solution to this highly important issue could be somewhat difficult to execute, but is very possible. First of all, all current undocumented immigrants that have committed a crime, or are currently in jail, shall be deported back to their home country. The family members are also required to go with. Second, any illegal immigrants in the US are required to fill out an application form for citizenship. This will be the same process used to manage incoming citizens into the US. If the do not meet the requirements or fail to complete the application, they will also be sent back to their home country along with their family. As for children who were born in the US, but their parents are undocumented is a different story. They parents are required to go through a less rigorous, yet still thorough application to become a US citizen. The kids are allowed to stay as US citizens. If the parents do not pass the application, the family can all go back to their home country, or the parents can either give custody away to a family member/friend or they can put the children up for adoption/foster care. That is my immigration plan in a nutshell. On another note, this topic is in very close relation to Global Goal #8, decent work, and economic growth. This plan would help sustain economic growth by giving more jobs to actually citizens as well as helping foreigners find new, good work.

border security illegal immigration immigration reform jobs immigrants
Published on Nov 9, 2016
Report a problem... When should you flag content? If the user is making personal attacks, using profanity or harassing someone, please flag this content as inappropriate. We encourage different opinions, respectfully presented, as an exercise in free speech.
Chaska Middle School East

We must find a way to create energy that is renewable, and clean. Change is inevitable, so we must start it now.

My letter is on the sexist dress codes in schools and how they body shames girls, and perpetuate rape cultue.

Why I think minimum wage should not be raised

Why Illegal immigrants should be tolerated

I am going to be covering issues on immigration(illegal immigration).

I am writing to the President about the illegal immigration issue and how it is hurting our country in many different ways.