Immigration Reform is a major issue. According to the Department of Homeland Security, there are an estimated 11.5 million illegal immigrants in the U.S. These people came to this wonderful country looking for a fresh new start to a better life. Many of them came looking for anywhere to work. Not all immigrants are “bringing drugs,bringing crime, or rapists” as Donald Trump believes. Many of them are afraid of breaking the law, out of fear of being deported.

Many parents of families have put everything on the line for their children to be born in America. The standards of living in Mexico are lower than in even the worst cities in the U.S. There are sometimes gangs, drug lords, criminals, and rapist in countries like these. Families are so desperate to get their kids to a safer world they will try to throw them over the border. Many people on this side don't get it why they want to immigrate to the U.S but they understand how much better life is in America. I know that criminals try to get across the borders and there may be a percentage of immigrants that tend to want to do more harm than good to the U.S. We should have a clear path to gaining citizenship for the immigrants that deserve it. The border patrol should be more trained on tracking down the criminal immigrants instead of the immigrants that want to work and gain citizenship.

Of course there have to be limits to everything. We can't have the entire population of countries  immigrate to the U.S. People that want to be legal U.S citizens should have proof that they will work hard to earn what they have and won't need help from the government. Anybody that works deserves to get paid whether legal or illegal. Work is work. Only the criminals that would do harm to this country should be kept out. We need to give every immigrant a chance to become a U.S citizen.

A new law needs to be passed saying all immigrants get a chance to be a U.S citizen. But if they break a law they have to get sent back. The process for becoming a citizen needs to be shortened from almost half a decade to a couple of months. These immigrants deserve to be able to work without worrying that their boss will call border patrol on them so the business won't have to pay the workers. Everybody should get a chance at becoming a U.S citizen and it should be easier and sooner to get the green card these immigrants deserve. 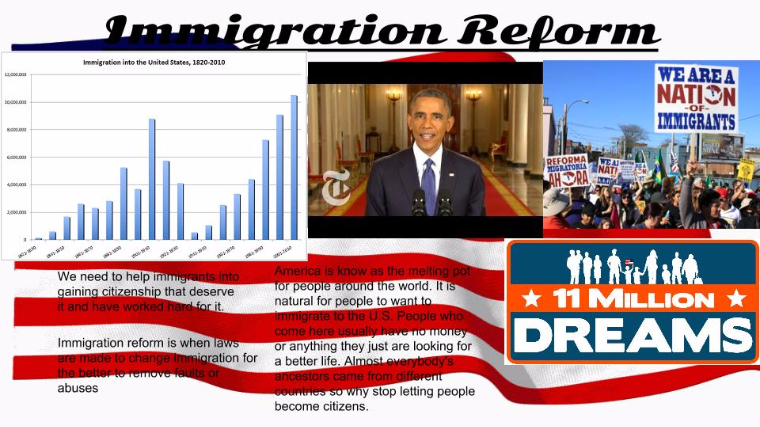 immigration reform
Published on Nov 8, 2016
Report a problem... When should you flag content? If the user is making personal attacks, using profanity or harassing someone, please flag this content as inappropriate. We encourage different opinions, respectfully presented, as an exercise in free speech.
Cedar Valley M.S. - Roberts' ELA

This is where Mrs. Roberts' students will write persuasive letters to the next president, using persuasive strategies.

Dear Future President, College is on top of almost every student’s mind as they finish high school. Many have imagined themselves walking up...

Putting an end to Racism in the U.S. will result in a friendlier environment for children to live in.

Stop Bullying from our lifes

Emissions produced by conventional vehicles are harming our environment and our health. We need a way to cut down the amount of these emissions.

There is a lot of gun violence in the country. With more gun control the violence rate would decrease.

Dear Future President, Our world has faced discrimination in many forms, but one has corrupted our entire workforce. The gender pay gap is the hu...

Why we need to start using alternative energy sources

how inflexible teachers are when they teach while just assuming that the flexible students are slow, when its themselves.

Dear President of the United States of America, Picture this. A woman gives birth to a sweet, beautiful, innocent baby who smiles at the world. Th...

Drug abuse is really dangerous and happens every day. We can change the life of millions of teenagers finding a way to help them stop doing drugs.

No matter how old, young, or what the color of your skin is, all lives matter.

Sexual assault on college campuses is a problem we should take more serious and put an effort to make an end to it.

Illegal immigration is a big issue in our country. We need to do something about it. This letter addresses this problem and gives information and a...