Having a family from Mexico without papers is not hard but having to worrying and living under the shadows without having your voice being heard. Having to wake up in the morning, going to school, worrying if "ICE" is going to get your mother taking care of your 7-month-old brother and your father who had a long day at work. Getting separated and going to different families not knowing about your sister and brother no more since the "ICE" have gotten inside your house and hand cuffed your other and father. My parents came here for the "American Dream" and see their 2 daughters and son to be successful in life than they did in Zacatecas and Jalisco, Mexico. Hearing their stories about when they were 7 years old not going to school because they didn't had enough money to afford the books, uniforms, and utensils for school. Instead they have been woken up at 1 a.m to cut wood, cut cactus, and bringing 50+ pounds of flours to do tortillas. They are many other immigrants with different stories but they all the same goal to be here, "The American Dream."

Learning form 2 different cultures, 2 different languages, 2 different nations. Having to teach your parents some English because "I don't speak Spanish only English." Having to teach your parents the American culture while they teach you their culture from Mexico. Listening to them saying "I miss those days when we went to the lake. I miss those days of being disobedient." Listening to them saying that they haven't seen their family in 20 or more years, seeing their faces trying not to cry in front of because they want you to be successful and see you do better than they ever have.

Before I was born, my dad crossed the boarder and when I was listening to his story, I was imagining how hard was it for him to cross. Crying of him about to die, without no food and water. "Debo darle gracias a dios a ese hombre por ayudar me pasar la frontera cuando ya mero me moria." Translation, I want to thank god for that man who helped me cross the boarder when I was about to die. Now seeing him, working from 2 in the morning until 2 in the afternoon, seeing bags under his eyes because of no rest for helping out his daughters on their homework, when he didn't be able to graduate high school. Asking me how to say things in English and looking over my shoulders to get the knowledge that he didn't get. The oldest of the family, being the role model for a sister and a brother. Having to set an example of graduating first in high school and college.

Many immigrants having different stories to be in the United states and crossing the boarder. 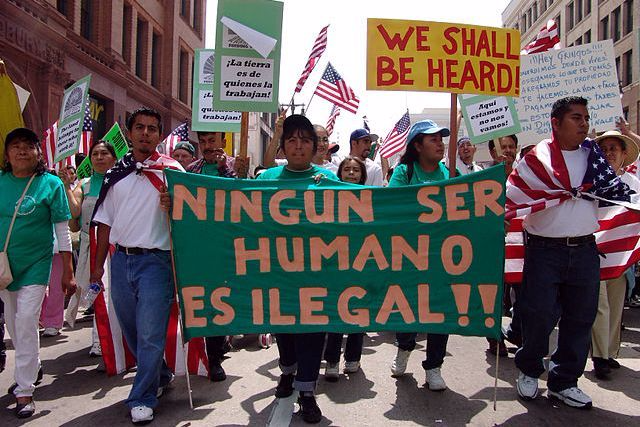 immigration illegal immigration immigrants
Published on Nov 7, 2016
Report a problem... When should you flag content? If the user is making personal attacks, using profanity or harassing someone, please flag this content as inappropriate. We encourage different opinions, respectfully presented, as an exercise in free speech.
Canyon Springs HS

College tuition has often been a border between people attending college or not. We want our new president to encourage college education and work ...

Do you genuinely love America?

It seems like Hillary and Donald are just like cats and dogs fighting for a position. A position to just have but not be determined to move America...

Why immigrants should be allowed to stay in the United States

Immigrants should be allowed to live in a place where many of us call it home. It's time to put yourself in our shoes.

We must increase funding for childhood cancer research in order to save the youth of our nation.

We need more help for people with PTSD. This condition can ruin many lives. More programs need to be built to help try to prevent this condition fr...

Everyone deserves a chance

Common sense on the topic of gun control

Gun control and the ways it'd effect our society

What should be done about Gun violence in America?

In short, I just want acceptance to be the main focus in the office and in the new president's mind

Regardless of political party, my only hope for the next executive of office is more bipartisanship.

The future of immigration process in the United States

~ The Importantance of Immigration ~

The Letter to Next President is about an issue that The President of The United States of America should know and be aware of which is Immigration!

Do you want a job when you're older? Your kids to be safe? A house to raise your family in? With Illegal Immigration some of these things may not b...

This country is one big mixing pot of cultures and races

Not all undocumented immigrants should be deported