Each year, guns affect hundreds of thousands of people's lives negatively. Gun control is thought to be a huge topic with many people arguing over which laws should be passed. Many people argue for both sides and they have various reasons for doing so. Some people argue that guns are needed for hunting and protecting yourself, while others claim that guns cause much more problems then the solutions that they create. Mr. President, we need stricter gun control laws to keep our nation and it's people (my self included) well protected.

Everyday, guns threaten our nation's safety and well being. They are way too easy too obtain and when in the wrong hands, they can cause some real damage. Teens and various criminals are able to use guns to take whatever they want and hurt whoever they want. People may argue that they need guns to for hunting and shooting competitions but in reality, which is more important, our nations security or some shooting competition.

One possible solution is that you could make it much harder to obtain guns. All current guns owners and all possible gun buyers would have to undergo extensive background and psychological tests to make sure that they are not criminals and that they will not go on a shooting spree anytime soon. You should also increase the legal age at which you are allowed to buy guns up from 18 to 25 so that we do not get lots of gangs filled with young people walking around and threatening people with guns.

All in all, guns are are controversial issue but that does not make them any less dangerous to people of all walks of life, whether they be a person of color or your average white person which is exactly why guns control laws are so important to us and our way of life. We need better gun laws to protect everyone. We need to protect criminals from committing crimes they would not have committed had they been unable to find a gun. We need to protect those who cannot or unable to protect themselves so that they will not lose it all to an accidental misfire from a toddler or a teenagers high or drunk who some how managed to acquire a gun proceed to use it in the worst way possible. 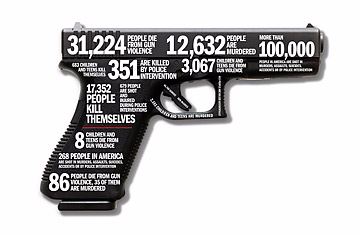 gun rights gun issues
Published on Nov 14, 2016
Report a problem... When should you flag content? If the user is making personal attacks, using profanity or harassing someone, please flag this content as inappropriate. We encourage different opinions, respectfully presented, as an exercise in free speech.
Peterson Middle School

A letter to our future president of a child abuse solution

How will you end Terrorism?

Medical Care is a RIGHT, Not a Privilege

Medical care should not be a privilege but rather a right for all people - no matter what race or gender...

America has a 20% wage gap between genders. That may not be a lot but imagine getting 20% less with a minimum wage job? How would that affect women...

Short video/write of what America's issues are.

This letter to the president will talk about how transgenders do not have enough equal rights and how it is not enforced. Trans people get discrimi...

Gun Violence is too high.

There is a big gun problem in America but with some procautions, gun violence can be reduced with out taking away peoples guns.