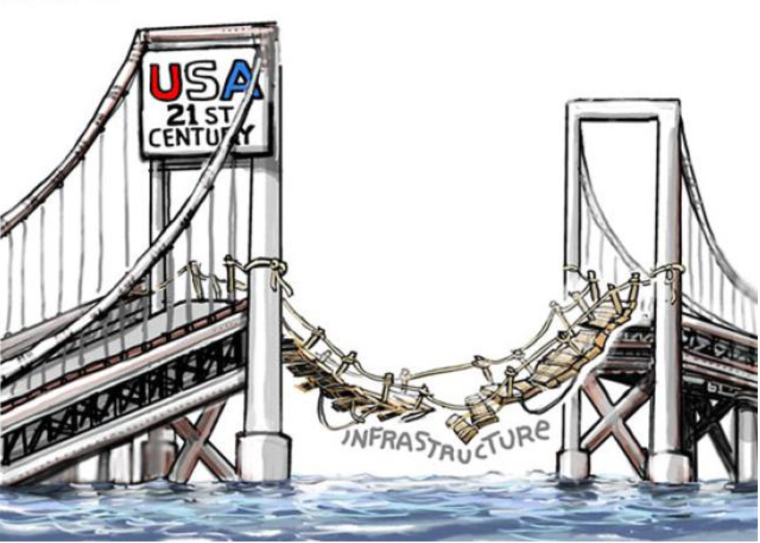 My name is Ethan Hughes; I’m writing to you from Pattonville High School in Missouri and the issue I want to bring attention to is the issue of our national infrastructure.

No doubt in your campaigning you talked about infrastructure and in the debates you alluded that it was a major concern. One of the biggest focuses of the race was creating new jobs; my plan is tailored to touch on both of these main points.

But before we examine any ideas we need to thoroughly understand why infrastructure is a problem in the first place and what benefits Americans will reap in by investing in infrastructure. That’s what the President’s office is for, explaining why we as Americans need to do this.

It clearly outlines the problems that America faces

“In the decades after World War II, the United States built an interstate highway system, hundreds of airports, a massive network of waterworks, expanded port facilities, and other infrastructure that significantly boosted the country’s economic output. Much of this infrastructure is in dire need of repair. In addition, better functioning infrastructure, including more efficient public transit systems and more environmentally friendly water and sewer systems, could boost economic growth and quality of life. Despite these needs, governments at all levels are failing to make the improvements that the nation’s roads, bridges, and other infrastructure need. “

What you can take away from that is our nation needs investments into our infrastructure, our nation can benefit from this investment and that governments at all levels are failing to do this.

In the past, the infrastructure projects of other nations inspired our policy makers. The Autobahn inspired President Eisenhower to secure passage of the Interstate Highway System through Congress. Today, policy makers suffer from a gridlock of will to address our crumbling infrastructure, and this will have devastating effects on the future of our communities.

That’s where we need you to step in, we need you as our elected president to change the tide of events.

One of the major concerns as discussed earlier is the creation of quality jobs. Infrastructure is the tool that can provide these jobs!

“The WPA that Built America is Needed Once Again”

They then further say

“A new and even modest stimulus package would help alleviate this critical problem and provide millions of skilled and unskilled jobs, but the deficit hawks in Congress will have none of this. They insist that such a use of government is contrary to the American way. To this, FDR’s would no doubt reply: To those who say that our expenditures for Public Works and other means for recovery are a waste that we cannot afford, I answer that no country, however rich, can afford the waste of its human resources…”

That’s what I want to drill home. Americans need to turn towards the future and go head long into preparing the best one we can muster. And a vital key to that is infrastructure. In many respects, America’s ability to realize its competitive potential depends on making smart infrastructure choices. These must respond to economic, demographic, fiscal, and environmental changes if they are to help people, places and firms thrive and prosper.

infrastructure national
Published on Oct 4, 2016
Report a problem... When should you flag content? If the user is making personal attacks, using profanity or harassing someone, please flag this content as inappropriate. We encourage different opinions, respectfully presented, as an exercise in free speech.
Pattonville High School

immigrants are not bad ...

Work Together To Prevent Teen Suicide!

Choose every moment inlife wisely, don't fall into a dark path. Shine light for others who can't find hope. Listen to those who need to talk, don't...

You can't judge a book by it's cover just like you shouldn't bully because you feel like your own torment is not over.

Europe as an Example

If we looked to our neighbors across the pond, we may learn something.

This letter is about the importance of US infrastructure and why we must find a solution to this problem.

A letter addressing the atrocities that occurred because of a careless mistake in Flint, Michigan.

Examining why there needs to be an increase on infrastructure.

Many rights are being violated due to National Security regulations