We are the worst thing to happen to the earth since the meteor that killed the dinosaurs. The Holocene Extinction, or the Anthropocene Extinction, is the period of time characterized by the proliferation of the modern human race. We are directly responsible for the destruction of ~900 species since we landed in the New World. Biologists estimate that a staggering 140k species A YEAR are wiped out as a result of worldwide human activity. For example, BBC warns that 1/4 of the ocean’s biodiversity is reliant on coral reefs, and we are poisoning them. In 2016, at the tender age of 25 million years old, the Great Barrier Reef was declared dead. But this is false- it is very sick, dying even, but we can still save it. Coral bleaching is a major threat to the health of our planet and ourselves.

Coral is really a living colony of organisms made up of polyps, tiny animals that secrete calcium carbonate to form a hard skeleton. These rigid bones form exquisite statue gardens in the shallows of the sea. They live in the tropical waters of the Pacific and Indian oceans, as well as the Caribbean and Red seas. The largest coral reef is the Great Barrier Reef off the coast of Australia. However, reefs can be found close to home in the popular vacation spots of Florida, California, Mexico, Bermuda, and the Caribbean Islands.

Coral gets their brilliant colors from the marine algae that lives inside their tissues. More importantly, these zooxanthellae have a symbiotic relationship with the coral. The Nature Conservancy explains that the algae nourish the coral with the carbohydrates they produce during photosynthesis. Up to 90% of the energy a coral needs to survive and reproduce comes from the algae. Unfortunately, this is a delicate relationship. If the temperature of the ocean increases even slightly, the algae are ejected from the coral. This is known as ‘coral bleaching’ because without the algae, coral turns white and begins to die. It can take years and years for a bleached reef to recover, and that's only if the conditions improve.

Increased ocean temperature due to global warming is the main culprit to blame for coral bleaching. However, the Australian Government notes that other possible causes include changes in salinity (salt content), sediment and pollutant runoff, and disease. A chilling graphic shows that 10% more coral in the Great Barrier became bleached between 1998 and 2002. This is a serious problem that affects the whole planet, and we need to work together to save the coral. According to the Nature Conservancy, coral reefs protect shorelines, support fishing industries and tourist economies, and could even be home to the next medical breakthrough. Millions of livelihoods will be wiped out. Human lives themselves will be at risk from rising sea levels and shore erosion currently prevented by coral reefs. Despite only being 1% of the earth’s marine ecosystems, they support 25% of the ocean’s species. Consider how much beauty will be lost from the world you are leaving to your children.

Everyone can help protect coral reefs, and the American Government needs to pass laws to enforce this before it's too late. This is yet another consequence of global warming. We need stringent and comprehensive climate legislation to reduce our national carbon footprint. If not, BBC scientists estimate that coral reefs will be extinct by 2050, even saying that we have already passed the point of no return when it comes to coral bleaching. Overfishing and Boat anchors also damage reefs, BBC adds, so we urgently need to police our marine activities. We need marine national parks of protected ocean for our coral to have a chance at recovery. Scientists at the Smithsonian Tropical Research Institute are researching the effects of temperature and pH in polyp growth. They recommend that we reduce the heat of the ocean by shading the reefs, and reducing acidity by adding lime/bicarbonates to the water. Alternately, we can ‘garden’ the reefs like an agricultural crop, breeding, raising, and taking care of them.

Coral reefs are on track to become the first ecosystem completely destroyed by mankind, BBC predicts, if we don't change our ways now. Please, Ms. President, we need to save us from ourselves. We must work together as a planet to save these stunning, natural works of art, or else they and all the marine life they support will vanish from the earth. 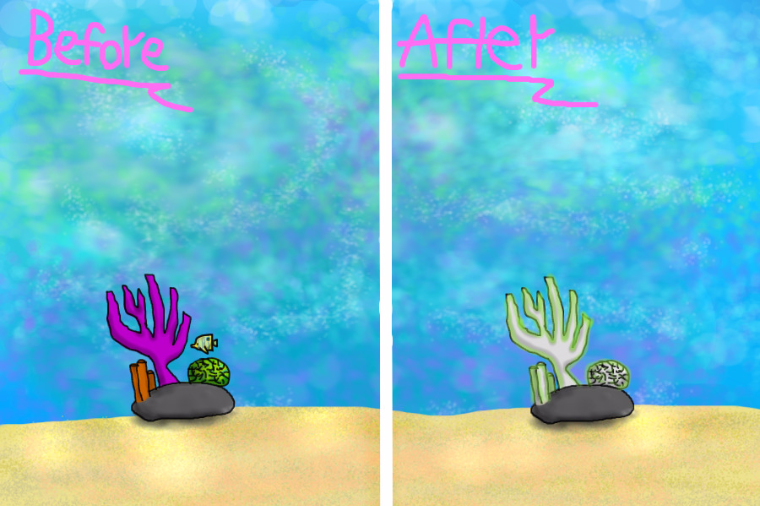 climate change coral ocean pollution environment
Published on Nov 3, 2016
Report a problem... When should you flag content? If the user is making personal attacks, using profanity or harassing someone, please flag this content as inappropriate. We encourage different opinions, respectfully presented, as an exercise in free speech.
Lewis S. Mills High School

Veterans have been dishonorably discharged for undiagnosed PTSD. Meaning they will not receive the rest of their payment and health care they right...

Social Security: A Necessity to Improving the Economy and the Well-being of the American People

This letter highlights the need for our future president to eradicate any forms of abuse, fraud, and wasted money in the Social Security system.

This is a video about economic issues. This video talks about minimum wage and about hurricane damage.

Climate change has an immense effect of the planet.

Dear Next President: The United States plays a substantial role in the percentage of carbon emissions worldwide. Will your presidency seek to take ...