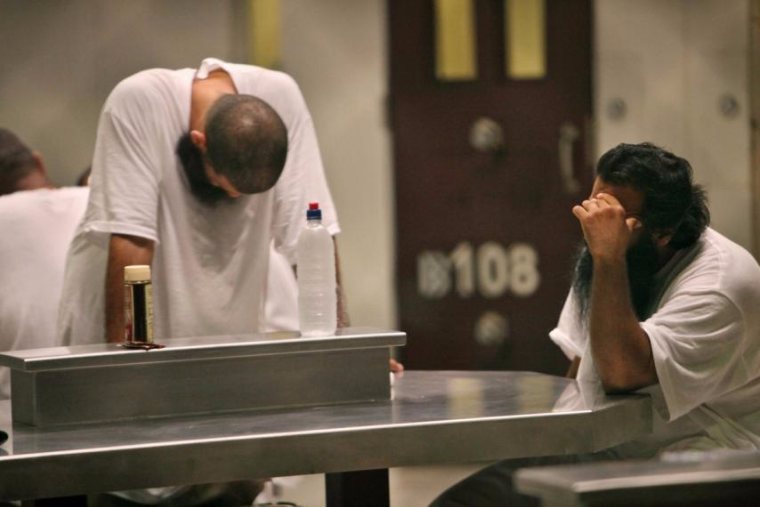 One of America’s biggest challenges today, as you very well know, is determining how to deal with terrorism, which seems to be getting progressively worse. I realize that it is a complicated issue that requires just as intricate a solution; however, there is one step that we as a country can and should take that will not only work towards the goal of terminating terrorism, but will also improve America’s character as well. Therefore, it is imperative that the Guantanamo Bay detention camp is shut down.

First of all, this prison camp is extremely unconstitutional. People who are taken there are usually people who might be a terrorist suspect or are on the terrorist watch list, but who the government cannot prove are affiliated with terrorism. Since suspects can’t be imprisoned because they haven’t done anything illegal, they are sent to Guantanamo Bay, where they are held in indefinite detention - for an unlimited time with no right to a trial. Although this is technically legal for the U.S. to do since Guantanamo Bay isn’t a part of the states and therefore isn’t governed by the U.S. Constitution, the continuation of this practice is telling the world that America is hypocritical. Our country takes pride in the fact that we give our citizens rights and freedoms that many countries around the world don’t have - rights including fair trials, and innocence until proven guilty. The fact that the Guantanamo Bay prison camp denies Americans these rights just shows the world that the U.S. has two faces - one that it shows confidently in front of the constitution, and one that it puts on behind the constitution’s back to cover up its fear. Do we really want to give the world the impression that America is hypocritical and unreliable under the weight of fear?

Furthermore,  according to The Atlantic, after admitting that the detainment camp violated international human rights laws, “the Bush administration argued that international laws did not apply to the ‘unlawful enemy combatants’ who were taken to Guantanamo". However, if the U.S. claims that we are allowed to imprison potentially innocent people for an indefinite amount of time and torture them because they might be our enemies, then we are lowering ourselves to the level of the terrorists, and giving them an actual reason to hate America. Also, this camp was created to prevent future attacks on America, but by treating so many innocent people with such cruelty between sending them there and torturing them for information that many of them don’t even possess, we are making our situation worse. All of the prisoners who have done America no harm are developing hatred for the U.S. for their lack of humanity, and the family members and friends of those unfortunate captives might even consider joining the terrorists to seek revenge on America.

In addition, the U.S. government spends seven million dollars every year on each prisoner that is held in Guantanamo Bay. First of all, that is a lot of money to be using for a cause that is not only cruel, but unconstitutional as well. Also, America is currently in a huge debt - if we terminated the use of Guantanamo Bay as a detainment camp, then we could put those hundreds of millions of dollars towards lowering the amount of money we owe other countries. Another economic issue that demands attention in our country is that teachers at public schools are ridiculously underpaid. If the U.S. got rid of the Guantanamo Bay prisoner camps, we would be able to pay teachers more justly for their services in helping our country’s children to grow into citizens who will contribute to and run America in the future.

Although it’s important to keep America safe from terrorists now, terrorism will never stop if we keep making short-term decisions that will be harmful for us down the road such as inhumanly capturing and torturing people who haven’t done America any wrong. If we really want to protect our country, we have to start by not giving people any true reason to terrorize us. I hope you can find a way to take the first step towards peace by shutting down Guantanamo Bay.

terrorism civil rights
Published on Nov 2, 2016
Report a problem... When should you flag content? If the user is making personal attacks, using profanity or harassing someone, please flag this content as inappropriate. We encourage different opinions, respectfully presented, as an exercise in free speech.
Lewis S. Mills High School

In this video, I address the controversial topic of gun control in America. I state the problem, and give reasonable solutions to the problem.

Civilians in the Syrian war are seeking refuge. Should America allow Syrian refugees into our countries?

The next president in office must destroy the Terrorist in the Middle East before they destroy us.

I wrote a letter to our next president regarding Isis in the middle east.