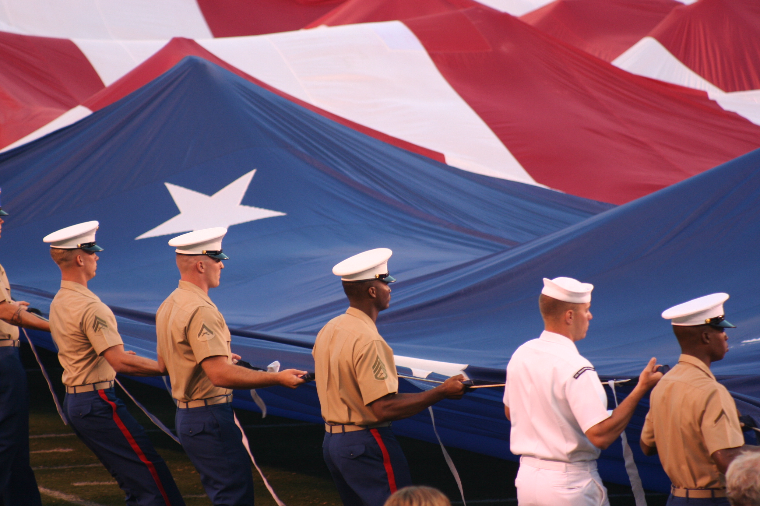 The purpose of our military is to protect our country, not play sports. The average sports player makes about $6,555,000, and the average military worker makes about $19,900. See the [difference? The military works just as hard, maybe harder and they deserve better than that! We need to help find a way to give them more money, they work to hard to just be plain out ignored! Sports players usually make tons of money, and the military doesn’t! I personally think that’s very unfair. Sports players may train almost all week, Monday - Friday that is. The military never stops working, from training at boot camp, to rescue missions or wars, it never stops! “Semper Paratus, Always Ready” is the Coast Guard’s motto, they never stop working, but sports players take breaks. When the military is on a mission do you think they sit down and grab a glass of water or gatorade and wait for the other men with them to do it? No, they don’t they keep working no matter how hard it is even if they are hurt. When they are on a mission they don’t give up or forfeit, they keep going, they NEVER stop. I personally think that it’s not fair, while our military are out fighting for our freedom against terrorists and other countries, they just run or skate around shooting and passing. While the military gets shot and killed they are just simply shooting a basketball or throwing a football. If someone from the military gets shot, no one really hears about it, when Steph Curry scores a winning goal it’s all over the news though! It’s very unfair, to them and to their loved ones.

We pay the Coast Guard about $20,000, and hockey players at most 10,500,000, that’s a $10,480,00 difference. Quite a lot, if you were saving the country would you want to be paid more? A possible solution to the problem is using more of our tax dollars towards the military funds, or selling military based items and having the money go to them. Or even having fundraisers for certain branches. I hope you will help fix this problem and not just avoid the situation, thanks for reading.

military sports players sports
Published on Nov 2, 2016
Report a problem... When should you flag content? If the user is making personal attacks, using profanity or harassing someone, please flag this content as inappropriate. We encourage different opinions, respectfully presented, as an exercise in free speech.
Lake Fenton Middle School

This letter is about the paparazzi.

Dog fighting is a big problem please help these animals. Speak for them.

Women should have the right to decide if they have a child, not the government.

The FAA (Federal Aviation Administration) need to be stricter on some laws about who can and can’t fly a drone by having a drone lesson to learn th...

The Second Amendment states, "... the right of people to keep and bear arms shall not be infringed."

How can we spend so much on military offense when the people of our country are struggling to meet their basic needs?

College Athletes Should not be Paid

Many Universities are considering paying their student athletes.

Students should be in and have longer sports times

Students should be in at least one sport and then practice time should be longer.