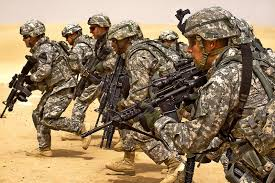 Our military is the largest and strongest in the world and hopefully it says this way. However, the attacks against ISIS and terrorism have been expensive and it needs to end. Every day our troops are being killed because of improper training and low ammunition when there is a firefight. This is because of bad military spending of unnecessary product which needs to be corrected.

Over 11 million dollars a day is spent fighting terror in the Middle East and as of 2015 6.2 billion has been spent. This put our country in more debt than it is in now (19.4 trillion), and the more the fighting continues, the higher it goes. Even our allies such as the U.K., Australia, Russia, Israel, Ukraine, and so on have spent too much fight a fight they never should have joined in the first place. Allied troops risking their lives end terrorism once and for all.

I believe that the percentage of military spending should be, National Security 40%, Space 2%, Vehicles (land, sea, air) 18%, Ammunition 26%, Research 7%, and Soldier salary 7%. Also certain departments are being spent on more than others when they are not helping us fight the war we are in. For example, the Coast Guard plays a big part in national security and they help protect our waters, however they could be spent on way more than say the Air Force, which is a crucial part of the war. If this change was to happen, it needs to happen without other countries knowing so they don’t attack us. Although the Air Force is not innocent, the use of Hellfire Missiles ($110,000 apiece) are being used on single enemy targets (infantry) instead of large groups. These missiles are fatal and pack a huge punch and can destroy a heavily armored tank, but with more research and engineering these weapons can become smaller and less expensive, with the same or even bigger impact.

And last but not least, soldier training. This is the most important part of our military that insures the survival of the men and women out on the battlefield. Training also tests the abilities of troops and what they are capable to do. However, improper training kills hundreds of troops that are fighting. For example, around 2015, a marine bunker was bombed by US F-16 fighter jets because of bad co-ordinates. With better training and understanding of how to call out co-ordinates, this incident would have never happened. Luckily no casualties were a result of this, only lots of damage to a base.

All of these reason afflict me because lots of my family is in the military and I don’t want to have a family member die because the U.S. doesn’t know how to train and fund their military right.

military funding
Published on Oct 19, 2016
Report a problem... When should you flag content? If the user is making personal attacks, using profanity or harassing someone, please flag this content as inappropriate. We encourage different opinions, respectfully presented, as an exercise in free speech.
Creekland Middle School

Too many black people are dying for no reason.

Air pollution is damaging our world, and it needs to be stopped

Need Stronger Men and Women to protect our Great Nation.