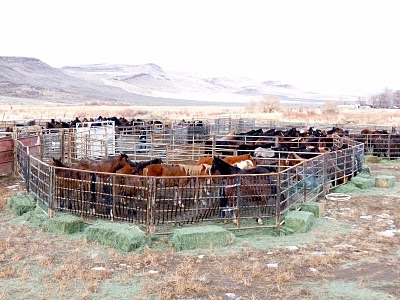 Did you know that according to the American Society for the Prevention of Cruelty to Animals (ASPCA) every sixty seconds an animal is abused? Wild mustang and burro roundups contribute to this abuse. Wild mustangs and burros roam free in parts of Arizona, California, Colorado, Idaho, Montana, Nevada, New Mexico, Oregon, Utah, and Wyoming. The Wild Free-Roaming Horses and Burros Act authorizes the Bureau of Land Management (BLM) to remove excess wild horses and burros to sustain the health and productivity of the wild lands. Although the roundup of these animals is necessary to the health of the ecosystems involving them, the way these horses and burros are rounded up and kept in holding facilities is too inhumane and expensive than necessary. It costs over 49 million dollars to care for the mustangs and burros a year. Some are held in these facilities for their lifetimes and have restricted freedom very different from the life they have lived before capture. Also, these animals breed while in these holding pens, increasing the population and costs to the government even more.

My proposition will help control the population of these animals, plus lower the costs on the government in the long run. We need a long term solution for this problem. Administering birth control to female mustangs and burros as well as castrating the males will prevent these animals from overpopulating as rapidly. The Bureau of Land Management has used a birth control on a few hundred animals but has found it only lasts a year. According to a June 2013 report, the BLM has been urged to use better research tools to develop a longer lasting medication, but hasn’t taken an effort to. Government should offer money to the BLM to specifically go to medicine research development and to hire veterinarians who would be able to anesthetize, castrate, and then release male mustangs and burrows.

In conclusion, the BLM should be fully equipped by the government to better their research on birth control and to hire the veterinarians needed. This will eventually decrease the population drastically enough to hopefully allow the mustangs in holding facilities to be released and to suspend any harmful roundups of the mustangs for several years to come.

horses blm animal abuse birth control
Published on Nov 4, 2016
Report a problem... When should you flag content? If the user is making personal attacks, using profanity or harassing someone, please flag this content as inappropriate. We encourage different opinions, respectfully presented, as an exercise in free speech.
Runnels

Animal abuse is a major problem in the Untied States

The death penalty in the United States needs to be abolished. It serves no real justice to the community. We as a country need to re-think this pun...

This paper explains why stricter laws and background checks are the solution to violence in America today.

Gun Rights are Necessary in America

There has been many shootings lately dealing with white policeman and African American people. There needs to be something done about this. A lot ...

America is in need of another great awakening for our spiritual, moral, and political conditions.

The death penalty has been debated for many years, and I think it is time to eliminate it officially.

Animal cruelty affects thousands of animals in the United States. So much more has to be done to stop it.