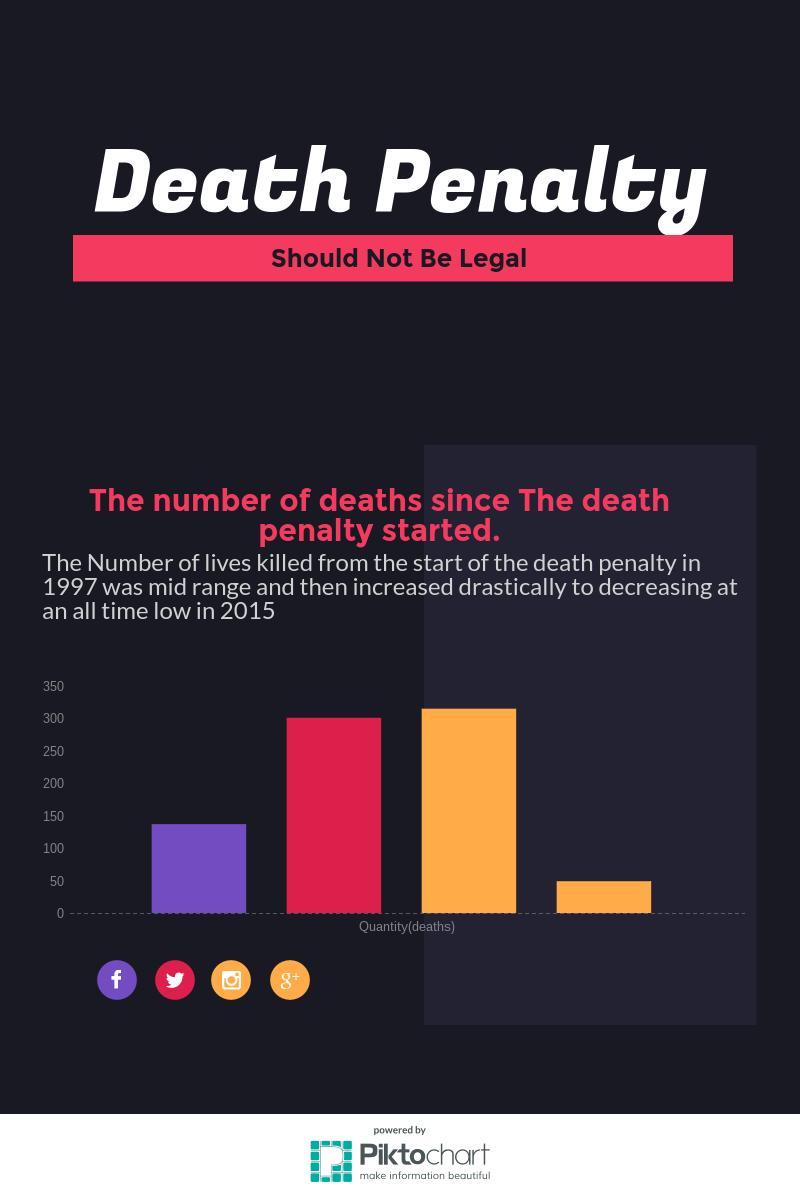 “There have been 1,436 people killed by the death penalty from 1977 to 2016” ("Should the Death Penalty Be Allowed?"). The death penalty affects many people because this rule basically gives the government a reason to kill people. The people impacted are the people that get executed when they weren't guilty. The death penalty should no longer be an option because imprisonment would be a harsher punishment, and because it is inhumane.

The death penalty should not be issued because it would be a worse punishment rather than imprisonment for life. According to research, “Proponents of the death penalty say it is an important tool for preserving law and order, deters crime, and costs less than life imprisonment. They argue that retribution or "an eye for an eye" honors the victim.” This shows what punishment does; it gives them a way out if they committed a crime. One can die and just get out of their punishment.

The death penalty should not be legalized because no matter what, no one deserves to die. Everyone makes mistakes and can change after they make their mistakes if they really want too. “Opponents of capital punishment say it has no deterrent effect on crime, wrongly gives governments the power to take human life” (http://deathpenalty.procon.org/). This shows that the government should not just have the power to take another human's life from them.

Some people might think criminals should die because of what they did because they might do it again and they don't want to have to worry about that person harming another person again. “Too many people are sentenced to death for crimes they did not commit. The death penalty is unconstitutional, inhumane, and ineffective at deterring crime” (http://deathpenalty.procon.org/).

It is vital that you, the future President, stops enforcing the death penalty on people because that isn't the right consequence for wrong actions.

life sentences imprisonment killing is wrong inhumane death penalty
Published on Nov 8, 2016
Report a problem... When should you flag content? If the user is making personal attacks, using profanity or harassing someone, please flag this content as inappropriate. We encourage different opinions, respectfully presented, as an exercise in free speech.
Oak Hills High School

Over-stressed and of no Significance

Religious Freedom? Not Any More.

The First Amendment states that we have the freedom of religion. But do we, really? Today, people are being arrested, taken to court and derided be...

The Death Penalty is Broken

This is a broken system and is cruel to those sentenced and to their families.

The death penalty should be illegal.

My opinion about the death penalty.