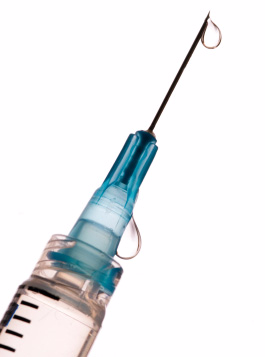 Sickness in school is a real issue. In my school alone, every day my class had at least 3 kids missing, this shows how fast a virus can travel, just imagine how bad a curable disease can get. If schools or government systems make it so vaccines are necessary in schools, then the chance of students getting sick or the chance of an outbreak occurring majorly dwindle.

There are parents who refuse to get their children vaccinated because of the myth of autism occurring from vaccines. Parents who don’t vaccinate their children can spread the disease to others, especially in areas where vaccination rates dip below 90 percent. With higher rates, the community tends to be protected by so-called herd immunity. That is, there aren't enough susceptible individuals to spread the disease from person to person. If parents or school systems everywhere used vaccines, diseases would quickly become less common, less people would get sick, and eventually the disease would die out because everyone would be immunized.

Influenza, Whooping Cough, and Tetanus are all illnesses that spread very easily and can be easily vaccinated. Even though they can be vaccinated, because of all the people who aren’t immunized, they spread like wildfire and can cause a whole school to become sick. Necessary vaccinations can make it so these illnesses can extremely lessen and become less and less common. To give more emphasis of the benefits of vaccination, in 1988, there were approximately 350 000 cases of polio in 125 countries. In 2000, due to vaccination, 2880 cases were reported in 20 countries. By 2004, polio existed in only 6 countries: India, Pakistan, Afghanistan, Egypt, Nigeria, and Niger. As you see, because of vaccinations, 119 countries wiped out polio, this could occur to any and all illnesses that can be immunized(Vaccines: both sides of the same coin).

Please Mr/Mrs. President, I implore you to help find a way to fixing the situation that occurs in almost every school system nationwide. Do you plan on letting more and more students become sick? Or, do you want to help fix and destroy all of the diseases that could be exterminated by immunizations. We’re all depending on you, and we trust that you will do what you can.

health school vaccines
Published on Nov 4, 2016
Report a problem... When should you flag content? If the user is making personal attacks, using profanity or harassing someone, please flag this content as inappropriate. We encourage different opinions, respectfully presented, as an exercise in free speech.
Wauwatosa West High School

The military funding should be higher so we can defend and defeat other military and other terrorist groups.

Abortion- Should We Adopt Instead?

Dear Future President, Abortion should be illegal in all or most cases because it's taking someone's life who never gets a chance to live. It is ex...

Teachers have been assigning homework to students for as long as the school system has been around. It is assumed that this helps kids learn, but i...

Why We Must Get rid of Standardized Testing

Should school be delayed.

Obesity in the United States

Who is to blame for our obesity problem and how can we resolve it?

Reliance on coal energy can have large impacts on the health of U.S. citizens. We must bring a new wave of renewable energy to reduce health risks ...

People should be educated about how to keep themselves healthy, and helped to make healthy choices.