Dear President of the United States.

One particular issue anywhere in the world, but specifically in the US is automotive pollution. Diesel trucks are a good example and they are what i will be talking about in this letter. Common problems with these diesel trucks are that they produce black smoke which is gross. I think that we should promote spending and getting diesel pumps that sell vegetable oil as a diesel substitute. A new study that says diesel exhaust contributes 15 times more than gas emissions per liter of fuel burned. ( UC berkeley researchers say)

Diesel engines when tuned properly are very efficient, and clean burning. Unlike the gasoline engine which uses high voltage spark to ignite the air fuel mixture, a diesel engine runs off of heat and compression, which makes it more efficient. The main issue is that we need more emissions on these engines. Common modifications are a tuner, what the tuner does is it injects a greater amount of fuel into the cylinders and instead of igniting it just produces large amounts of black smoke. Also known as rolling coal. And yes this is illegal but this issue needs to be heavily enforced. You see it everywhere from big trucks to small diesel cars. It is hard to breathe and is doing nothing good to the environment.

One solution would be converting . . . By converting your diesel engine to vegetable oil it is better for the environment because most places just throw out the old oil at restaurants, it’s basically free because no one wants it. And by selling this vegetable oil at the pumps you are making money for something free. And yes selling the oil would cost money but it would be significantly cheaper than your basic Ultra low sulfur Highway diesel sold at all fuel stations across the US This is just my opinion but I believe it would all work out in the end. The new findings contradict previous research that put the blame on gasoline-fueled vehicles as the predominant source of precursors that form secondary organic aerosol. “We can now say that, while both motor vehicle sources are important for these ‘secondary’ particles, diesel is responsible for a larger portion, especially in regions such as the San Joaquin Valley with a lot of diesel use,” said study principal investigator and professor Allen Goldstein.

I drive a diesel truck as my daily driver. I like it and i have things that i don’t like about it. For example starting it in cold weather. Mine is still stock there are no modifications on the the fuel injectors. If We had a source of Biodiesel at the pump i would heavily consider converting my truck to run off of it. My truck is a 1990 Ford F250 7.3 liter diesel and i love driving it. I honestly believe selling biodiesel will reduce the price we spend on regular diesel fuel and have a purpose for excess waste oil from restaurants. 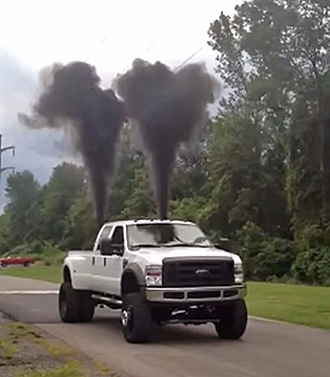 pollution cars carbon footprint diesel
Published on Nov 8, 2016
Report a problem... When should you flag content? If the user is making personal attacks, using profanity or harassing someone, please flag this content as inappropriate. We encourage different opinions, respectfully presented, as an exercise in free speech.
Wauwatosa West High School

Planned Parenthood for Everyone!

Planned Parenthood should NOT be defunded- it is a valuable facility for many women, men, and young adults who need assistance or a service.

An important issue I think the next president should address.

People with disabilities rights being taken away, them being neglected and thought to be outside of society, there is no hope left for them in this...

Why we should put a tighter hold on preventing animal abuse.

Growing up, we are taught that college is the next step in life after high school. The problem is, this next step costs us tens of thousands of dol...

We need to switch to renewable energy sources and sway away from fossil fuels.

People have accidents, but leaving the scene with a dead body is just wrong.