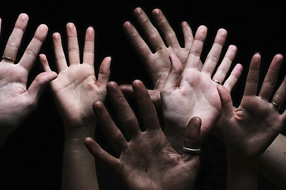 The most important issue to me is about equal rights. I believe that everyone should have equal rights, regardless of race , ethnicity , religion, or sexuality. Many people here are treated unfairly or discriminated against. In the U.S constitution, it states that every person should be treated equally and have the same rights. I believe this is something the United States does not follow. We are not equal in this country. Some are given more rights than others. I believe that nobody should be judged by their skin color. Just because they may be African American doesn't mean they're going to do any harm. Just because someone may be Hispanic does not mean that they are drug dealers. Just because someone may be Muslim doesn't mean they're here as terrorist. Some people may come here to seek refuge from all the terrible things happening in their country. If they come here, it's for a better life, not to do any harm, and definitely not to be discriminated against. Many get discriminated for the small handful of other peoples bad decisions, but what America doesn't seem to understand is just because other's skin isn't white doesn't mean they're not human. It doesn't mean they're planning to do any harm.

Everyone has their own beliefs and everyone should feel safe with believing in what they do. Just because we all believe in different gods or leaders does not make us much different. Everyone should have the freedom of believing what they want and they should never feel threatened for having that belief.

I am glad that gay marriage is legal in all 50 states. Everyone should be allowed to love who they want legally. However, even though gay marriage is legal, gay people still get discriminated against. They get the majority of hate. They get judged and put down and sometimes even force to hide who they love. This isn't right and it just isn't fair. What's wrong with two guys together or two girls together? As long as they're happy that's all that should matter. America together needs to understand gays should have rights just like every other human being. Them having a different sexuality shouldn't make them much different then everyone else. The hate they receive should stop. Nobody should feel less for loving someone. They shouldn't get called any names. They shouldn't be looked at as though they are dirty. They shouldn't have to feel the need to hide it. To the point where all this hate for themselves builds up. Everyone should be themselves without getting judged. Love is love.

religious freedom equity race sexuality
Published on Sep 19, 2016
Report a problem... When should you flag content? If the user is making personal attacks, using profanity or harassing someone, please flag this content as inappropriate. We encourage different opinions, respectfully presented, as an exercise in free speech.
Pleasure Ridge Park High School

I am going to be talking about how Gay Marriage is wrong. I hope this can encourage the next president to stop Gay Marriage. Marriage should onl...

Vaccines need to be mandatory, to protect the health and safety of the American people.

A letter to the future president of the United States about how every single person matters.