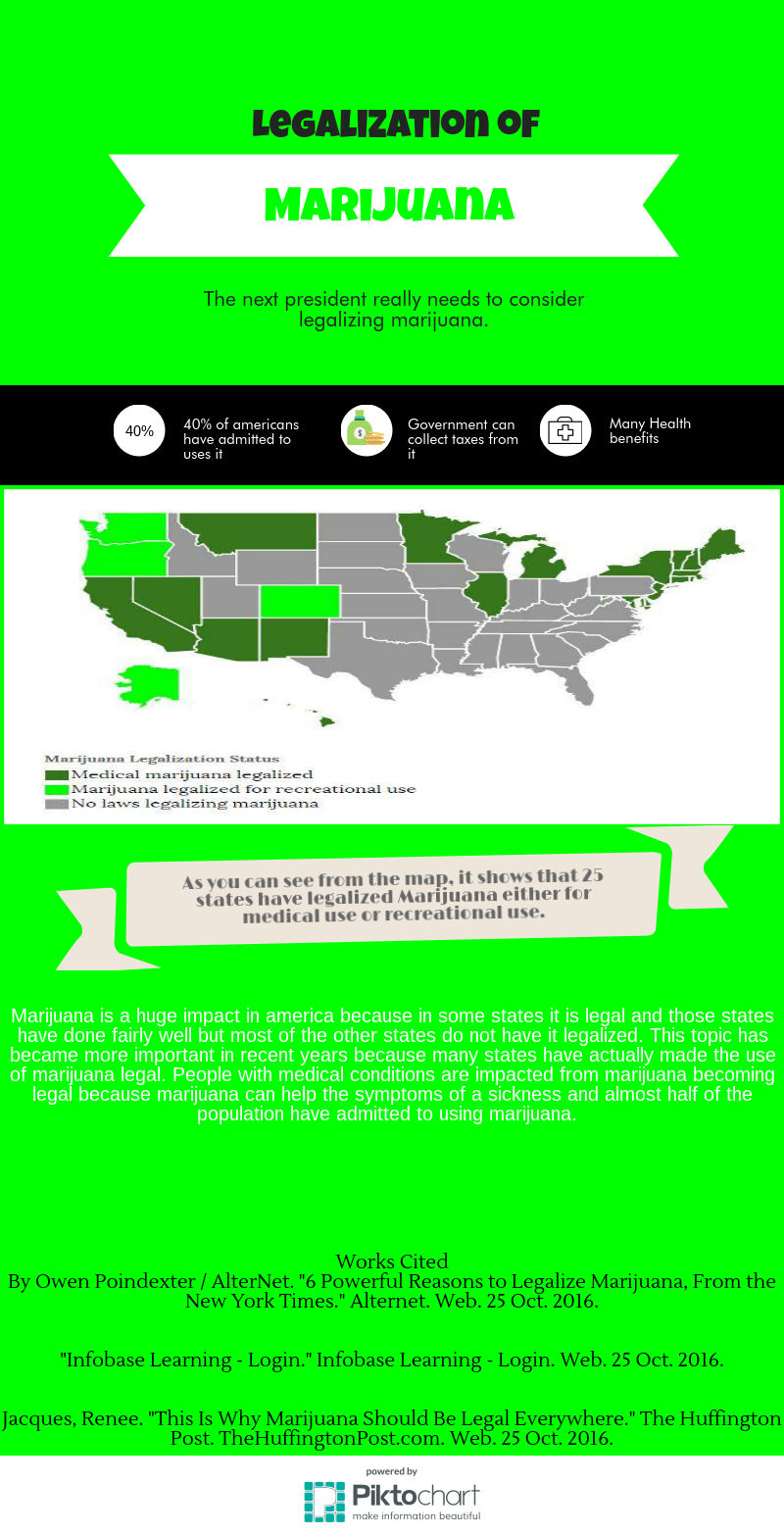 Marijuana has a huge impact in America because in some states it is legal and those states have done fairly well, but in most of the other states it is not legal. This topic has became more important in recent years because many states, 25 to be exact, have actually made the use of marijuana legal. People with medical conditions are impacted from marijuana becoming legal because marijuana can help the symptoms of a sickness and almost half of the population have admitted to using marijuana.

First, marijuana should be legalized because lots of people have already admitted to using it in one way or another. ”40% of Americans have admitted to doing it” (Jacques). This is saying that almost half of America has used marijuana. If the government would legalize the plant, it could be used to collect taxes. Take Colorado for example, “The taxation of marijuana has also prompted debate. In 2014, marijuana sales in Colorado totaled $700 million and generated $44 million in tax revenue.” This could make a huge difference in the United States. If every state had marijuana legalized, it would cause a huge growth in tax revenue.

Another reason it needs to be legalized is because it can be used for a lot of health benefits. “It has a lot of medical uses.., Marijuana is less addictive than tobacco or alcohol, and compares favorably to those drugs on nearly every health metric” (Poindexter). This shows how it is way better for someone than tobacco and alcohol, even though both of those are legal and marijuana isn't.

Some people might say that using marijuana can make you lazy. Although the counterargument is understandable, there have been studies that show that it does not make you lazy. Marijuana does not make you lazy, you make yourself lazy. If you want to do something you go do it. Laziness is a mindset, if you have the mindset to be lazy then you will most likely be lazy. Also you may think that it is a dangerous substance but more people have died from peanuts than marijuana (Smith).

All in all I believe that marijuana should be legalized in the United States. It is vital for the next President to make it legal nationwide because almost half of the U.S. already admits to using it. Also the medical benefits that come with it are too useful to pass up legalizing for another 4-8 years.

Finally, marijuana should be legal in the U.S. for two main reasons. Medical use and people are using it even when it is illegal so why not tax it? Thank you, future President, for taking time to read my letter. People need to realize that it is being used illegally when it can be used for benefits legally.

marijuana legalization health drug policy Taxes
Published on Nov 8, 2016
Report a problem... When should you flag content? If the user is making personal attacks, using profanity or harassing someone, please flag this content as inappropriate. We encourage different opinions, respectfully presented, as an exercise in free speech.
Oak Hills High School

Is All Hope Lost?

17% percent of the homeless population used to be in the military. This is a really big problem and we might not have very many people in the milit...

People in America are overdosing on drugs everyday which is a serious problem in our country.