About 43% of today’s Americans, don't attend college. Many of these people actually wanted to go, but couldn’t because of financial reasons. For many, a college education is the only thing holding them back in life. The problem is that the cost of college is becoming too high for students in the U.S. The cost of higher education must be addressed because millions of students all over the U.S. are struggling with the high costs during, and after college.

High college cost must be addressed because student debt is a growing problem in our county. According to Student Loan Hero, there is approximately $1.26 trillion dollars in student loan debt from all over the U.S. This number has been growing from the 43 million people across the country who have borrowed money for college. For students that want to learn more, and achieve academic success, should not be in debt for the rest of their lives just because they want to pursue their academic dream. This problem is just going to get worse because college tuition just keeps rising. According to The Center for Online Education, in the year 1987, students only had to pay 23% of the cost to fund their college education. By the time 2012 came along, students had to pay 45%. In just 25 years, the cost for college went up 22%. These numbers are just going to keep rising unless you, the president, address this problem.

This growing nationwide problem, is especially a complication because students have to pay off debt years and years after they graduate college. According to the U.S News and World Report, the average person with a bachelor’s degree takes approximately 21 years to pay off their student loans. This means, a student would be about 42 years old before they pay off their debt. That is an enormous chunk of a student's life they could be spent doing things that they enjoy. Many argue that this is an investment that is necessary because it will end up making you more money in the long run. This argument is valid, however life is unpredictable and things might not always go as planned. You might not get the job that you planned for which would pay off your debt. They only way someone would pay of their debt is if they were put into a perfect scenario. College is supposed to be the last form of education to get you ahead in life, however today it is most commonly found as the thing that sets you back in life. As the president, it is important for you to make this change to our high college costs.

One easiest ways to lower the price for college, is to cut unnecessary programs and classes that students do not attend. According to CNN, colleges are adding different amenities and new classes for students to take in order to make the college stand out more and make itself more appealing to the public. This is a problem because if they add more classes, then they also need to add more teaching, training, and supplies which greatly increases the cost of college tuition. It is important to have a variety of classes in a college, but many colleges have exceeded the point of productivity versus price. Having these unnecessary classes just brings up the price to much. So it us up to you as the president to make sure these colleges aren't teaching these useless courses

College is supposed to be the last step into adulthood, however many students find themselves being in enormous debt for several years after they graduate just because of outrageous college tuition. Something must be done to fix this nationwide problem. 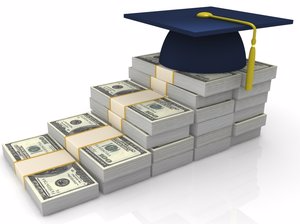 student debt tuition college
Published on Nov 4, 2016
Report a problem... When should you flag content? If the user is making personal attacks, using profanity or harassing someone, please flag this content as inappropriate. We encourage different opinions, respectfully presented, as an exercise in free speech.
Wauwatosa West High School

Coaches get payed for what?

We should increase the minimum wage

Depression is a major problem that can happen to anyone. While someone is depressed, they can start thinking about suicide. Everyone should try to ...

Abortion should be illegal because of all of the harmful effects on women, families, and babies.

I am a sixteen-year-old student in high school who is enthusiastic about learning. I am concerned about the effects of student loans and the cost ...

Free Higher Education is Not the Answer

The best way to give everyone equal opportunity and stimulate economic growth is not by making higher-level education free.