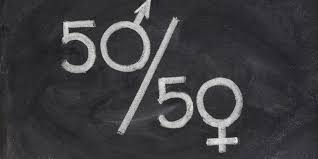 My name is Cynthia and I am a sophomore at Belgrade High. Being a female I get kicked to the curb when it comes to doing "manly" things such as lifting heavy things, working out, playing sports, even something as simple as snowboarding and skateboarding. Being that I am one of two girls in a family with five kids, the other three are boys. I don't get asked to help my dad with his construction work. When we started adding onto our house and we needed to lift up the walls my dad needed help. My dad’s dad was helping, my brothers were helping and our neighbor. My dad still needed a little more help and he wouldn't even ask my sister or me. Finally, I told my mom that I really wanted to help and she told my dad to ask me. To think that not even my own father thinks that I am not able to help really hurt. So what I am a girl, what does that mean? That I can’t work, can’t lift things or do things by myself? I don't know how other girls feel but I'm sick of it, sick of being judged for being the gender that I am. Feminism isn't just about being told you can’t do the things men do but, also, how much we get paid doing those things. According to IWPR, in 2015, full time working women got paid 79 cents for every dollar a man made. Even though men and women do the same job, women still are payed less.

I’m writing this because I think that you can do something about this issue by equaling pay rule among men and women in the United States. I want to feel equal to the opposite sex not labeled as a pussy because I can tell you right now I have more balls than most of the guys I have met.

Thank you for your time!

equality
Published on Nov 7, 2016
Report a problem... When should you flag content? If the user is making personal attacks, using profanity or harassing someone, please flag this content as inappropriate. We encourage different opinions, respectfully presented, as an exercise in free speech.
Belgrade High School

Sophomores refusing to be sophomoric.

The way men are treated better then women, should not be happening. Everyone should get treated equally no matter the gender. Genders do not define...

My goal in this letter is to announce my reasons on why I personally think that abortion is a cruel thing to do and shouldn't be legal.

My letter is about creating a new scholarship for college students who's financial aid has ran out.

People from every race has a right to live in America, and they are only migrating to America to be safe, and to be free!