My name is Olivia Guza and I'm a sophomore at Belgrade High School and already I'm thinking about college and how it will affect my family. In its most recent survey of college pricing, the College Board reports that a "moderate" college budget for an in-state public college for the 2015–2016 academic year averaged $24,061. A moderate budget at a private college averaged $47,831. If any of those schools are the colleges of your dreams, what are you going to do? In my opinion I think college should be nearly free. Millions of citizens are missing out on education because of the extreme costs. What if the students that have missed out could have made a major impact on this country? You never know who could find the cure to cancer or develop new kinds of technology. That's why the cost of tuition should be more accessible to lower class citizens.

In this country there are a lot of unfortunate families that can't afford college. According to the Pew Research survey, about 47 percent of Americans call themselves solidly middle class, roughly 11 percent said they were upper-middle class, 29 percent said they were lower-middle class, and 10 percent called themselves lower class. Just 1 percent of Americans called themselves upper class. Combining upper-middle class and upper-class that's roughly 12 percent of citizens in this country that can likely rely on their own money alone to support them through college. The rest of us who aren't as privileged have to rely on scholarships and loans. What happens when you want to go to an out of state college or an ivy league school but you aren't lucky enough to get a full scholarship? Debt is what happens, years and years of debt. I'm going to explain to you why the cost of college tuition should be lowered to nearly free for the remaining 88 percent that face hardship by going to college.

Let's think about where all the tuition money is really going. Most of that money isn't even benefiting the student who is paying for it in an educational way. A lot of it is going to cover expenses associated with drastic declines in state funding, athletic teams, ever-growing college administration needs, and excessive renovations and updates. As states move away from investing in public higher education, colleges have to choose between cutting expenses or raising tuition to make up for their lost revenue. In reality, their only real option is to raise tuition or lose quality of education. More than half of core educational expenses at public four-year universities are now funded through tuition. Making a smaller impact, but still worth talking about is that dorms are now updated to modern standards and organized into suite-style rooms with shared study areas and bathrooms. They feature plush common spaces, all-night cafes, and campus wide WiFi. Then there's the food. If you graduated from college before 2000, you probably survived on frozen pizza, a wilted salad bar, and if you were lucky enough, a frozen yogurt machine. The menus at today's campus dining facilities more closely resemble a 5 star restaurant rather than a college cafeteria. They provide fresh local produce, offer vegetarian (and even vegan) options. Another problem area is Athletics. The athletic teams sport the latest and greatest gear, play in brand new stadiums with lighting for night games and most schools even provide their athletic teams with their own private exercise facilities. Lastly, public colleges are employing “substantially more” part-time faculty and professional staff, such as employees who work in admissions, human resources, information technology and athletic departments that often aren't necessary but have become part of one of the problems in the work force. It could be argued then that some of the more underprivileged families are missing out on college because of the expensive cost of gourmet foods, beefed up administrations, and the athletic department's extravagance.

There are several ways that we can make this change happen. One way is taking some of the government money that is going towards the military and invest it towards educational purposes. On average, 602 billion dollars goes towards defense and security-related international activities. Granted a lot of it has a purpose, but a lot of it is unnecessary spending. The military spends around $179 billion on nuclear weapons, something that we only use as a threat. If just that $179 billion dollars went towards educational purposes there would be a whole lot more families that were able to get an education. Another way that schools could get more money is through multi-million dollar businesses contributing. I believe that when these companies make over a certain amount that can be decided upon they should be forced to contribute a percentage to higher education. These are the various ideas that I've brought to your attention, now what are you going to do about it? 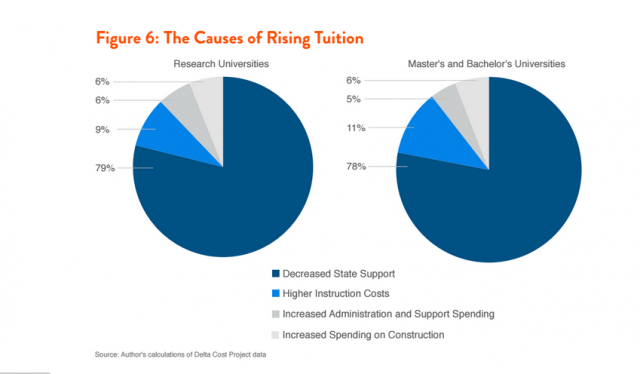 Education Costs
Published on Oct 26, 2016
Report a problem... When should you flag content? If the user is making personal attacks, using profanity or harassing someone, please flag this content as inappropriate. We encourage different opinions, respectfully presented, as an exercise in free speech.
Belgrade High School

Sophomores refusing to be sophomoric.

Our education system needs to switch to the block schedule. It allows more time for the teachers and students. Block scheduling causes less stress ...

Good Health Care is Not a Want, it's a Need

Every american should be healthy, mentally and physically. But some can not be healthy because health care is too expensive.

College needs to be cheaper for people to attend to. I believe that the next president can do something about this.

College costs in America need to be reduced.

Why We Need to Reduce College Tuition

Many American students are put beyond the reach of education due to high tuition. As a young student I have found the importance of getting an educ...