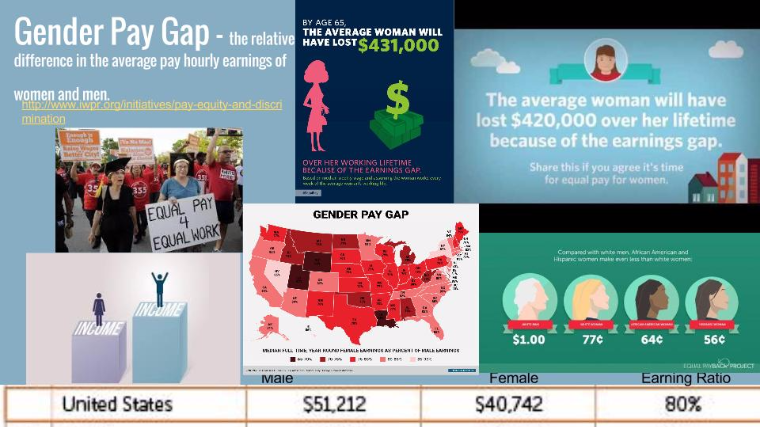 People need to make money for everything and when their is an unfair amount given to most people that causes a problem. Women deserve equal pay for equal work. In this generation we have worked out many discrimination problems. In 2015 women only made 80 cents for every dollar a man made. Those 20 cents add up causing a major difference. A good example is, say a man was making $51,212 a year. The pay difference would cause a women to only make $40,742 that same year. That is a difference of $10,470 each year.

A lot of people say that pay is equal and women just have different jobs than men. For example when a man has a job where he has to go out and get his hands dirty, like a gardener or plumber, they sometimes will get tipped which obviously adds to their salary. But, tips are not always the case. Most of the time discrimination happens when women and men will have the same job. That is when it crosses the line and just plain unfair.

Since many companies forbid employees to discuss salaries with each other therefore many people don’t know if they are being paid equally. A way to fix this could be having businesses set one, fair amount that everyone receives their first year. Then the years after that you can only earn more than someone else if you get a raise or work overtime. That makes pay very fair. This is fair because no one will receive lower than a decent set amount and you have to earn a higher amount. Research says that women and men wouldn’t have equal pay until 2059, but with ideas like this one it could be a lot sooner.

gender wage gap
Published on Nov 8, 2016
Report a problem... When should you flag content? If the user is making personal attacks, using profanity or harassing someone, please flag this content as inappropriate. We encourage different opinions, respectfully presented, as an exercise in free speech.
Cedar Valley M.S. - Roberts' ELA

This is where Mrs. Roberts' students will write persuasive letters to the next president, using persuasive strategies.

The minimum wage must be raised to help around 1.7 million people in the United States to stay out of poverty.

Improving the healthcare in the U.S is very important. Everyone should get the same amount of treatment even if someone is wealthy or poor.

There is a increasing amount of police issues and it needs to be stopped.

Dear President, People always tell me to focus on the positive and not the negative, but if we don’t notice any of the issues in our countr...

As the use of electronic devices advances, the more cases of cyber bullying will occur.

LGBT Rights and why you should try and help the lgbt community.

College Tuition is on the rise and we need to do something about it.

Police Violence has become a major issue in American society.

Dear future president, The Earth is the only place we have to live, and I don’t think we are taking the best care we should take to our only pl...

Dear Mr./Madam President, Legalize Marijuana. This issue has been going on for over a century, and you must take action immediately. Change ...

Women are getting paid less than men for the same amount of work.

Police brutality is becoming a big problem facing America. Especially when it involves life and death.

It is important to end inhumane acts such as torture. Torture is used worldwide. It is a cruel form of mistreatment that is forced upon people. We ...

Women are getting paid less than men for the same amount of work.

Why we must abolish the Gender Wage Gap

America has a 20% wage gap between genders. That may not be a lot but imagine getting 20% less with a minimum wage job? How would that affect women...