I think your first priority as president should helping worldwide hunger. We have both an obesity problem and a starvation problem. People in the bronx, people in every state, and around the world, don’t have money to put food on the table. What are we doing to help that? At the moment, not very much. As of a recent study “5 percent of American Households (6.3 million households) have very low reliable access to nutritious food. “ (Hunger Notes) These people who do not have reliable food try their best and often turn to the federal organizations, and about 59 percent of households in the survey stated that in the previous month, the had participated in either (SNAP; Special Supplemental Nutrition Program for Women, Infants, and Children (WIC); and National School Lunch Program).(Hunger Notes) Along with that, the amount of people who go hungry everyday is staggering. “Some 795 million people in the world do not have enough food to lead a healthy active life. That's about one in nine people on earth.”(World Food Programme) This isn’t just happening in third world countries. It’s happening in our own Land of the Free. In Philadelphia, 49% of the requests for shelter are going unmet, and 20% of the food requests are also going on met. 1/5th of Hungry philadelphians aren’t getting the food support they need.Also, in countries like haiti and southern africa, children are constantly dying of starvation. The reason I believe this should be the top priority for you, is because the 21,000 children who are dying every day deserve a chance. They have dreams just like us, but we need to reach out to them in order to change anything.

I believe that we have a major hunger problem, that just keeps growing unless we do something to help. One of the main causes of hunger of hunger is poverty. This is because more than 3 billion people (more than 1/2 of the population) lives on less than $2.50 a day or less, and more than 1.3 billion live in extreme poverty. Living on about $1.25 a day. This matters because they may not be an american, but they still are just like us with dreams and ambitions. They have the human right to live. Any of those kids could change the world but weren’t given a chance. The 21.000 thousands people, even just making that number up to 20,000 makes a world of difference. Additionally, a lot of hunger is caused by armed warfare. War interferes with agricultural improvements. Government spending is centered around arms more than on social programs. The US alone spends around 601 billion dollars on warfare and military defense, more than the next 7 highest countries combined. I believe it’s your job to decide whether we really need to be spending that much, in comparison to helping thousands of lives. (BusinessInsider.Com) This matters because all of the people that deserve a chance to live, to eat. From the human rights. This should be a priority for you because this is the next generation of people to better our world. We don’t feed them so they can continue to be hungry, but that they are innocent and deserve to be feed.

Many people believe that hunger is the result of poverty and limited food is the cause of worldwide hunger. The main causes of chronic hunger are as follows, poverty, armed conflict, environmental overload(over consumption by wealthy nations), discrimination, lack of ability(they are powerless and can’t protect their needs because they don’t have the power to be heard. (freefromhunger.org) This matters because it is often thought that we don’t have enough food. But, we do have enough food it’s just being distributed evenly, and that’s what we need to work for. Some people believe that it’s not worth our time, energy, or resources to help them. It should be your top priority top stand up for those who can’t voice what matters to them. If you do not act over the poverty, armed conflict, environmental overload, etc. than the amount of daily starvation will only grow.

The US has the money, we just aren’t putting it in the right places. The solution is to put more money towards shipping out food. It doesn’t have to be a ridiculous amount, but at least two times as much spending going to feeding the hungry would make a huge difference. This is directly related to the global goals of no hunger, no poverty, and good health. We are trying to work towards a better world, and the globals goals are guiding it. So if this goes against three of them it should be our top priority. This matters because just increasing the spending by double would take a huge step closer to abolishing global hunger. This is the priority because they are people just like us who didn’t get a chance to fulfill their goals. People are dying by the thousands and it’s our job as humans and your job as president to help that. 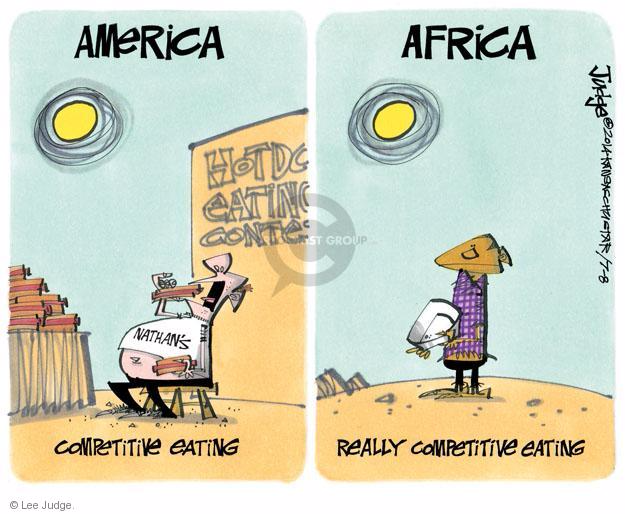 This image really shows how we aren't putting food in the right places, in America we take the food we have for granted. We need to help those who don't have the food, not wasting it unneccessarely.

Poverty hunger starvation
Published on Nov 9, 2016
Report a problem... When should you flag content? If the user is making personal attacks, using profanity or harassing someone, please flag this content as inappropriate. We encourage different opinions, respectfully presented, as an exercise in free speech.
Chaska Middle School East

There shouldn't be hundreds of lives being lost due to ISIS while the US isn't doing enough to stop it.

This letter is about getting more laws on guns, so the gun violence decreases.