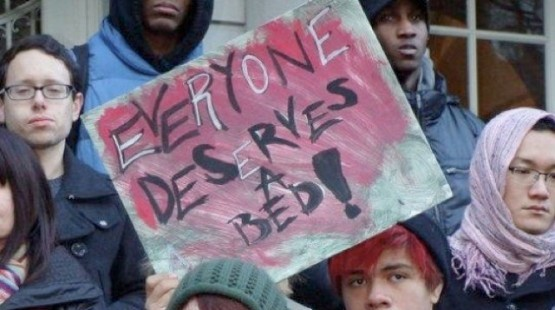 my name is Jewel, I’m a normal 14-year-old who just started high school. I have one question for you, why are shelters so strict? Why can’t a homeless person come to a shelter for help and not get judged if they drink, or do drugs or even if they have a animal or a child with them. I am disgusted about how many shelters turn down people for little issues that every person has. We are all human right? So why are some treated like a mistake or a mess up?

I have been outraged about how many people I see on a daily basis fighting for their lives, begging for food, or sleeping on the street. It pains me to see that our shelters nowadays make people who don’t have homes want to stay on the street because the shelters rules and or obligations to get into the shelters are harsh. I wish to make more shelters open with drug/alcohol addiction counselors, animals allowed, and so families won’t be split apart.

Most shelters nowadays have shocking rules, and on top of that there aren’t a lot of shelters in the first place. I think all shelters should welcome anyone in need, being supplied with doctors, and or other needs for these people seeking help. I think a lot of the homeless population has a drug and alcohol addiction, and most shelters don’t allow them in if they have any kind of substance within their body. The shelters I’ve been researching actually demand a drug and alcohol test before entering (Onslow Community Outreach, inc.) leaving more people on the streets because they can’t get into a shelter.

Yes, I do understand that all the rules they have are for safety, but there is no need to reject someone for having alcohol or drugs in their system unless they are acting in an atrocious manner. Most people have addictions with not just substance abuse but with mental disabilities and they have no money to afford to get medicine and or help by others. I think all shelters should have in-house doctors just so these people can get what they need.

My second fight is animals, you cannot count how many times I’ve seen a homeless person on the streets with a animal(s), and it breaks my heart to see that these people can’t bring a FAMILY member into a home for safety and food. Most people fight for food for their animal rather than themselves (JustOneMorePet/Every Pet Deserves A Good Home…) and if that doesn’t show you love then I don’t know what would, because animals are a huge part of everyone’s life and a person can’t simply take them away, or give them up. I’d rather have homeless people in a home with their loved one instead of on the street.

When someone is homeless and can’t afford house, or food, etc. the last thing you want to do is take away a child. Most shelters separate the child from the parent for obvious reasons but that makes it even worse, because a child shouldn’t be put on the streets, yes. But do not make these families separate. I do not agree with these shelters separating, or taking things away from a person, because they came for a place to sleep and eat, not to get their things, or family taken away.

animal abuse homelessness Poverty safety family separation
Published on Nov 16, 2016
Report a problem... When should you flag content? If the user is making personal attacks, using profanity or harassing someone, please flag this content as inappropriate. We encourage different opinions, respectfully presented, as an exercise in free speech.
West Seattle High School

Our current rate of carbon dioxide production is going too fast for life to adapt.

In the U.S. abortion is a way to get rid of an unwanted child but there are alternative routes.

Homelessness in the US

This should not be a big problem for the US.