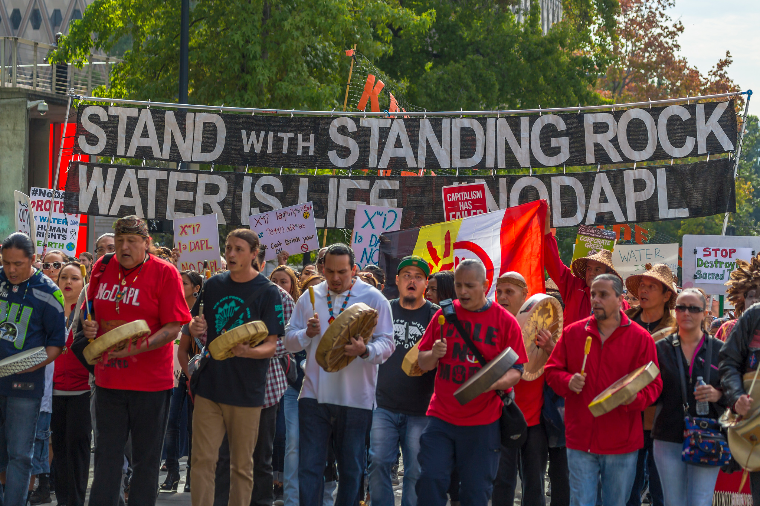 America is supposed to be a land of equality and freedom to all who come, so shouldn’t those same ideals apply to the indigenous people of our own country? Native American problems have long been overlooked by society, which is extremely unfair, and the rest of America should be paying more attention to these problems and addressing them.

My knowledge on this topic is very limited, but my research began with the Dakota Access Pipeline (DAPL). Not only is the pipeline extremely toxic to the environment, but it in turn poses a threat to the way of living for many Native Americans. The potential for an oil spill is extremely high, due to the fact that over half of our country’s pipelines are at least 50 years old, according to a 2012 examination by ProPublica. The DAPL is located so closely to a water source for the Standing Rock Sioux tribe that if it were to burst, water quality would be severely threatened for the members of this tribe. Water quality should not be a topic of discussion, it is part of an American citizen’s birth given rights that they are entitled to life, and that means clean, safe water. The DAPL is not only potentially extremely harmful to the environment, but unfair to the indigenous people of the area and should be stopped.

The pipeline, however, isn’t the only cause of environmental suffering Indigenous communities have had to deal with. According to an article by The Conversation, “Indigenous communities are among the first climate refugees, having to decide to relocate due to sea-level rise in the Arctic and Gulf of Mexico, as well as other places across the U.S. sphere”. These problems are a cause of modern society today, as we are dependent on fossil fuels that create global warming. Climate change also puts Native Americans in danger of losing significant cultural and spiritual animals, like moose and salmon, as habitats change, and animals migrate. Because of how small American Reservations have become, they cannot travel with the animals to their new locations, and face huge religious implications.

In fact, U.S treaties are supposed to guarantee access to species for tribes when species migrate, but there is no way of knowing if you, the government, will honor their promises. This needs to change and the government needs to be held accountable for The construction of the pipeline has also destroyed some of the Standing Rock Sioux sacred burial grounds in the process and will continue to destroy important cultural land, according to the New York Times. This is completely unjustified and unfair. This tribe never gave consent for their religious grounds to be trespassed, and trampled on by an richer and therefore more powerful oil company.

Back to my original topic; the DAPL. By stopping the pipeline, you would show Native Americans that government support can lie in their favor, over rich and powerful companies. You would be stopping the pattern of overlooking conflicts that result in Native American problems, environmental harm, and later impacts on indigenous peoples. This, I hope, can create a change in the thoughts of society. More attention could be brought to issues regarding minorities and groups who do not receive equal opportunities as the rest of Americans.

Many people argue that a lot is being done in society to help Native Americans, by providing assistance to low-income areas in the forms of college tuition, medical care, etc. However, Native Americans communities are still the poorest in the nation. And how can that compare to the hundreds of years of loss and devastation felt by many tribes? Money can’t replace sacred burial grounds, or bring back the culturally significant animals that once roamed their lands.

The government has too much control over Native Americans in America and that should definitely change. Many treaties have not been honored by the government and it leaves Native Americans less capable in society today. Their voices have been silenced over time, even by the media, and that needs to change. The government has not only exploited poor Native American reservations in order to help richer companies, and industries, but has also stripped a lot of culture from these tribes as well. How can we call ourselves Americans if we aren’t helping those who allowed us to settle here in the first place? My question to you, future President, is will you continue to silence the same voices your predecessors have? Or will you be the change America needs in order to better society and truly promote equality for all.

justice system equality native american dapl
Published on Oct 31, 2016
Report a problem... When should you flag content? If the user is making personal attacks, using profanity or harassing someone, please flag this content as inappropriate. We encourage different opinions, respectfully presented, as an exercise in free speech.
Avondale High School

The cost of living in big cities is having a toll on families by putting them in poverty.

Many bright students are unable to get a good college education due to their families not having enough money. This is a problem.

The side of those involved with the building of the Dakota Access Pipeline.