Racial Profiling is an ongoing problem in society. Many racial profiling victims walk away with traffic tickets, but too often for others the outcome of racial profiling is death, wrote the American Civil Liberties Union (ACLU).This has been causing minorities to live in fear of death, violation and to dread even stepping outside on a daily basis. There have been many situations in which minorities have been discriminated against by law enforcement, which lead to unjust results such as death, critical injuries, and imprisonment.

Would you like to wake up tomorrow morning to news that your father was killed by those who are allegedly protecting us? Do you want to live in fear, afraid to even be in the presence of our “protectors” thinking they might pull a gun on you at any moment? As the next president, you need to alter law enforcement’s image to be positive again by changing traditions in police training to be logical. American citizens can then feel safe again.

An example of one of these horrific events would be the death of Eric Garner by Daniel Pantaleo, a white police officer of the New York Police Department (NYPD) in Staten Island, New York City. According to the New York Times, on March 2013, a year before Garner’s death, Damico and Pantaleo received a complaint from a landlord, Gjafer Gjeshbitraj, about men loitering outside of his apartment selling cigarettes and drugs. Gjeshbitraj had singled Garner out specifically during his claim to the police stating that one of the men’s name was Eric. Damico and his then partner had let Garner down with a warning several times before. This time Garner was trying to break up a fight. When Damico and Pantaleo were sent to address the problem, July 17th, 2014, they knew what they were doing and what they were getting themselves into. Pantaleo put Garner in a chokehold for several seconds until he was left unconscious and handcuffed on the ground. A cellphone recording by Taisha Allen and Ramsey Orta, two spectators and ,Mr. Orta, a very good friend of Garner’s, showed that, during the chokehold, Garner pleaded eleven times for breath stating “I can’t breath” and Pantaleo ignored it. Pataleo later testified he was thinking that Garner was trying to use the statement to get out of being arrested. According to the autopsy report the next day, strap muscle hemorrhages in his neck and petechial hemorrhages in his eyes were found and no drugs or alcohol were in his system. It also confirmed that the compression of Garner’s chest while being handcuffed by officers also contributed to his death. Garner did not receive immediate care, but when he did, he was sent to the hospital in an ambulance where he then died of cardiac arrest.

Another example of a disturbing event that involved racial profiling was the death of Oscar Alberto Ramirez, Jr. by an unnamed Los Angeles County Sheriff of Paramount, Los Angeles. November 10, 2014, the Revolution Newspaper wrote that Ramirez was trying to break up a fight when he was shot by a LA deputy. A few minutes before detectives were informed by a bystander that a fight might occur near Paramount High School, deputies went searching for said fighters and found Ramirez and two others near the railroad tracks behind Paramount High School. The two others ran, while unarmed Ramirez was shot and killed by a deputy. News reports state that deputies did not see a fight, but that Ramirez fit the description given by a bystander. A gun was not found after deputies searched the area for several days. Ramirez died at the scene.

The solution to this problem would be to change how police officers and individuals in the law enforcement field are trained and what they are told about the real world in training. December 12, 2014, the Atlantic Daily reported that during training, officers are essentially scared into pulling a gun on a suspect, as they are shown that the consequences of not having a gun on hand or shooting the suspect in time can cause the officer harm or death. Officers are also taught to assume that the suspect’s intentions may be to hurt them at any chance they get. Officers should be trained to negotiate or civilly speak with the victim before things have a chance to get out of hand, instead of using assumptions as their reasoning for pulling a gun on a suspect. An officer’s assumptions and fear may lead to the use of a gun and may also lead to mistakes and cause the suspect to be wrongfully killed as they may have not done anything wrong.

In conclusion, law enforcement needs to recognize the impact that they are having on the world. As the next president, the way that you could change this would be to change specific police training protocols all around the country. This will greatly impact all life in the United States and decrease the amount of fear in people of America.You should also work on changing the training of law enforcement officers so that people of America can trust them once more and feel safe in the place that they reside. All citizens should be able to come together in unity and peace to work through our problems without chaos and deaths because of fear, unbalanced power, and assumptions. Uniting society will also allow individuals to be informed so that they will not be afraid of a certain race or culture, but will understand and put other people’s experiences and lives into perspective. 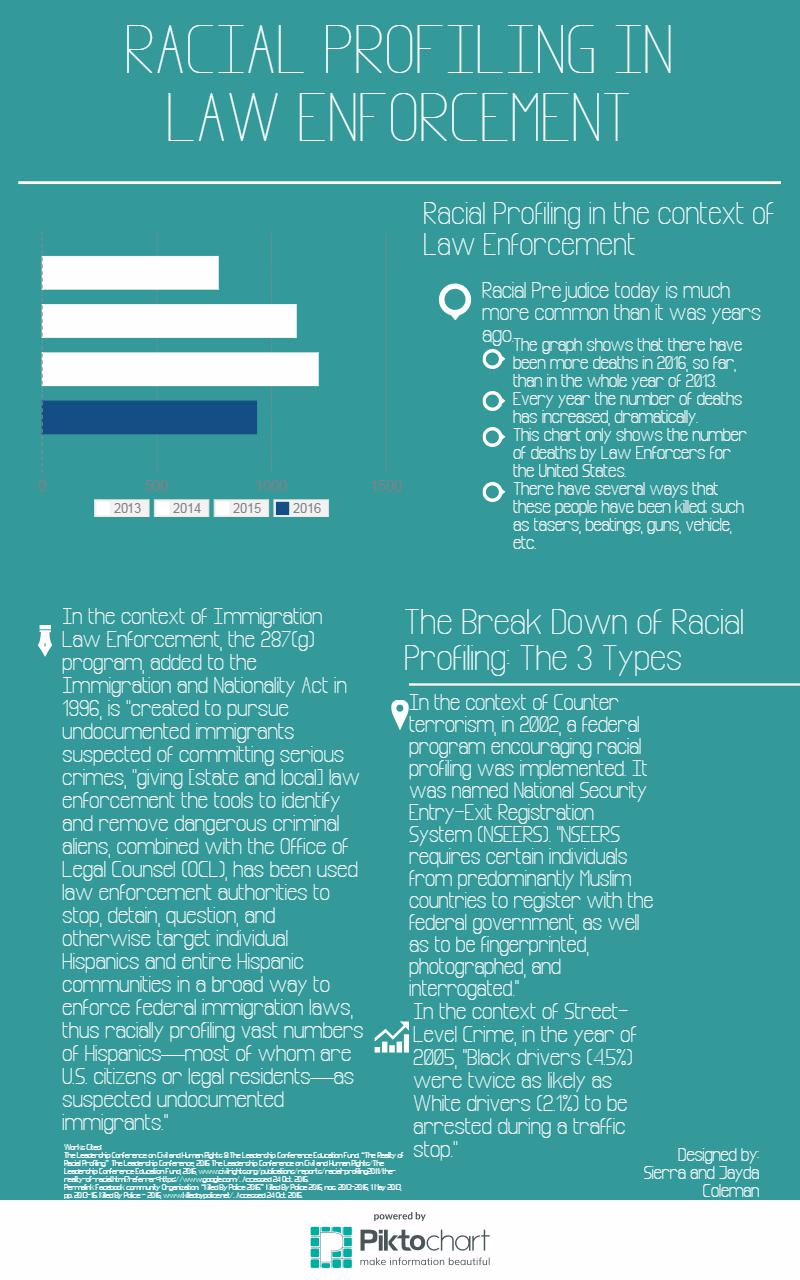 minorities racial profiling
Published on Oct 27, 2016
Report a problem... When should you flag content? If the user is making personal attacks, using profanity or harassing someone, please flag this content as inappropriate. We encourage different opinions, respectfully presented, as an exercise in free speech.
Wake Young Women's Leadership Academy

Just because we are girls, doesn't mean we shouldn't get paid as well.

Racial profiling and police brutality have become some major problems in our nation. Something must be done to fix these problems.

How does a movement about injustice against black people affect everyone in the nation?

Recently, there is lots of tension between the police and the community they are serving mainly because police are shooting black African Americans...