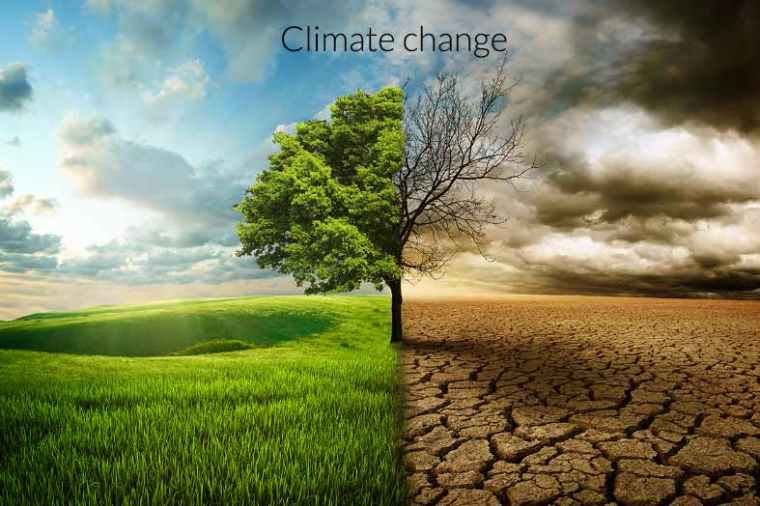 Our polar bears are drowning, the sun is burning, and the world is drying up. It is a national issue in the world today that has to our attention. This issue is called Climate Change, also known as global warming. Caused by our pollution, the world is slowly changing and we’re afraid it will not survive. As a nation, we should be the ones to fix this and save our only planet.

Climate change is causing devastating things to happen to our world. As time progresses, we see that climate change has taken a turn for the worst. Storms, droughts, heat waves, and other tremendous events are occurring. There has been large glacial melts, and temperature has been rising around the world. It not only causes events like the melting polar ice caps, killing wildlife like polar bears drowning and endangering other animals. Other evidence demonstrates, according to Woolpert passage on Climate Change, that “the oceans are become more acidic” which in turn kills fish. Widespread droughts are contributing to forest fires, killing animals, destroying their habitats and causing lot of cautious and destruction.

There is a cause that lead climate change to happen: our cars, our factories, our gas heating systems etc. These things are used in our everyday lives, running on fossil fuels like gasoline, oil, and coal. Our everyday things burn these fossil fuels and produce chemicals that go into the atmosphere, these chemicals are called carbon dioxide (CO2) and methane (CH4). Even though these be absorded by trees and oceans, our pollution has over produced the amount of carbon dioxide our planet's resources are able to consume. With the leftover chemical not use, they are left to float about the atmosphere, causing destruction in its wake.

Now chemicals, close to the ozone will make chemical bonds with the ozone. The production of these chemicals are released into the air and soon depleting the ozone layer. The layer is broken down by a new chemical bond brought forth by the carbon dioxide and methane gases. The chemical bond then leaves holes in the layer, which in turn gets trapped and lets in more uv-rays. Uv-rays, also known as ultraviolet light, are invisible waves coming from the sun. They can cause suntans and sunburns when exposed to too much. When trapped in our atmosphere, can cause the disasters of climate change.

Some people believe that climate change is not an issue, and say that we shouldn’t be worried about it or that it does not even exist. They think nothing is happening and that temperature is not changing. Some may say Climate Change is not real, but studies have shown over the course of the century, there has been a “1.4°F increase in temperature” (“Background of the Issue”). This report Includes studies about CO2, proving the increase of carbon dioxide and methane over the same time frame as the temperature increases. Showing that we could have even caused it, being that we produce so much CO2.

Knowing now what climate change is and how it happen we need a way to fix it. A way of fixing this is using renewable energy like wind and solar generated energy. Replacing all fossil fuels with replaceable energy, we can reduce amount of CO2 produced drastically. Also by replacing these fossil fuels, we do not have to worry about when all our natural resources are gone. Even though we fixed problem and stopped the production of the chemicals, what will we do with the remaining CO2 already in the air. Planting more trees can be a positive way of taking carbon dioxide out of the air. Doing this the tree will absorb the chemical and as a result produce oxygen. Eventually with our trees and renewable energy, our planet will be back to normal. though there will still be damage in the ozone, it will not longer be get hurt anymore than it already has.

Climate change, being a massive contributor to many negative things, in our world. We have come see all the natural disasters it has cause. Due to our fossil fueled machines, producing carbon dioxide, making a chemical bond, creates holes in the ozone. Though some people think this process of climate change is now really it has been scientifically proven. With the help of science and green thumbs we can decrease the activity of global warming. Are you ready to finish Climate change and further this nation and world?

climate change drought carbon footprint endangerment pollution
Published on Oct 19, 2016
Report a problem... When should you flag content? If the user is making personal attacks, using profanity or harassing someone, please flag this content as inappropriate. We encourage different opinions, respectfully presented, as an exercise in free speech.
Orange High School

This letter is about ways the President could help solve some problems related to pollution.

The effects of Climate Change

The polar ice cap is melting, the Earth is getting warmer, and we need to do something about climate change.