Every eight seconds a baby is born in the U.S. One in sixty-eight births, are born with autism and one in seventeen thousand births are born with albinism. Rarely are both conditions in one child. For those of you who might not know of what conditions I’m talking about I am going to explain. Autism is a disability that affects the ability to communicate with other people and/or children on a “normal” stand. Babies and adults who have this condition have difficulties paying attention to something presented to them or verbally spoken to them. Also as making eye contact, poor motor skills and sensory sensitiveness. In other words, trying to pay attention and holding things or on things. Their behavior for some people could be founded awkward or annoying. In the other hand, albinism is “an inherited condition that is presented at birth”. It’s identified by a lack of pigment in the skin, hair and eyes. It is found in all races and it may be accompanied by eye problems and may ultimately lead to skin cancer. The most common type of albinism is oculocutaneous. It affects the eyes, hair and skin. Everyone with oculocutaneous albinism experiences abnormal flickering eye movements and sensitivity to bright light. The second most common type of the condition is ocular albinism. This condition is only in the eyes and lacks color. It’s skin and hair are normal. The parents of most children with albinism have normal hair and eye color. They don’t have a family history of albinism. I believe that the children and the adults that have this condition should be treated equally no matter how “abnormal” they might look or be. That even though they might have something that sets them apart from being “normal” that they’re still like everyone else because they are still humans.

Not only are this children and adults affected by not only their condition but also because of the excluded people that don’t know about their situation.Their families are the one who suffer the most. It hurts them seeing the person (whether child or adult) trying to be accepted in their world and people brought down by the people in it. They all feel like they can’t never be accepted by their own kind just because of how they look or how they act. When it’s not even their fault. When it’s their own kind that is wrong in treated them like if their were something else. This has been going on for years. Even though it’s not as noticeable as other issues; this still happens on a everyday basis. Some people bully the persons who have this. They might call them names, tell them they not good enough, that they are weird, etc.

People have brought awareness to support this persons and to give knowledge to the excluded one and to show them that the people with this conditions aren’t less nor more human and them. That they are all one. That they just want to be treated like a normal person not someone with its conditions although in some cases they do have to be treated differently. I would try to bring more awareness to people and i would explain to them how those people feel and give them information and tell them to put themselves in their shoes so they can feel what they feel when people treat them so rude. I would have people spend time with kids and adults who have this condition so they see that they are just like us “normal” but just like everyone they are a little different. That just because they are a little different it don’t mean they have to be treated unfairly or less human.

I would know that I succeeded in my goal of having the kids and adults with this condition treated equally and feel that they belong somewhere when I ask the people who spent time with them how they felt before being with them and how was their experience after it. I would know I have succeeded when their expectation change towards them and they try to keep making it better for the other kids and adults with this condition. Then, I’ll know what I did was the right thing and I have changed some people’s state of mind and maybe made them a better person than before. 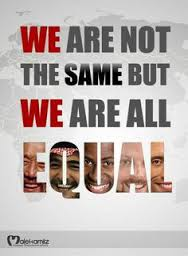 equality letter to future president health civil rights
Published on Oct 17, 2016
Report a problem... When should you flag content? If the user is making personal attacks, using profanity or harassing someone, please flag this content as inappropriate. We encourage different opinions, respectfully presented, as an exercise in free speech.
Facing History New Tech High School

Distracted driving is a serious issue in today's society that needs to be tended to.

I thought that an important issue is that college cost is too high for students and families.

The United States Must Take in More Syrian Refugees

I ask you to reframe the Syrian refugee crisis from a political burden to a test of principles, which carries with it serious implications for our ...