I would like to start this letter off with congratulations to you, you're America's president, you've persevered, and now it's your turn to lead our great, free country. I'm writing this letter to address the possible chance that war would ever come to our country, whether it's nuclear or not, from other countries such as Russia, China, or North Korea. Could you please inform them that sometimes our citizens don't get a say in what happens in politics in America? Sure, we would definitely stand behind our leader 100% as U.S. citizens because we love to live in our "free" country, but sometimes politics, greed, and corruption seem to cloud the judgement of leaders and politicians so they forget to collect an opinion or take the best interest of their citizens to heart. It's our duty to elect a president who we see can lead us through tough times, like F.D.R. who led us out of the Great Depression, and we know some decisions can't be made to accommodate everyone's thoughts and opinions.  War on the other hand is different. It not only affects the government, but the loss of life, resources expended, and citizens who may be killed if nukes are released from both sides is not replaceable, nor is it fair. Killing a whole population of many major cities just for the gratification of winning a war is not the way to go. We wouldn't get a chance to defend ourselves, we would be just killed in the cross fire. A leader who doesn't take the opinions of the people, starts a war, gets more than half the population of the country killed, and wins the war hasn't won anything at all, but satisfaction and bragging rights. War, if it happens, shouldn't be a surprise to the people because we should be prepared by our president. A leader with a country behind him/her in full support is much more stronger than a leader dragging 320 million people to possible death without our full support. The only thing I ask is make sure that if war is emerging, don't hide it from the people, prepare us, or even if it's instant (like terrorists attacks on 9-11) make sure that we are all prepared to support or defend our country, and if there are attacks on the homeland "minutemen" would be great to have. If war comes and we know it's coming then we can help defend our beloved country from enemies foreign and domestic. 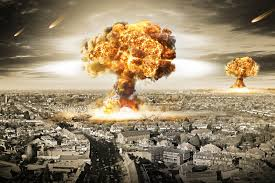 War
Published on Oct 22, 2016
Report a problem... When should you flag content? If the user is making personal attacks, using profanity or harassing someone, please flag this content as inappropriate. We encourage different opinions, respectfully presented, as an exercise in free speech.
Facing History New Tech High School

We need to lower college and university tuition cost before our economy collapses.

Dear Future President, My name is Bobby, and I am an eighth grade student at a school in Cleveland, Ohio. You know that illegal immigration is a ...

Lowering the drinking age would cause much more problems rather than benefiting us.

A paper on world policing issues.

In order to reach world wide peace we must first respect each others differences.

My letter is about the need to end terrorism, one of the greatest problems facing society today.