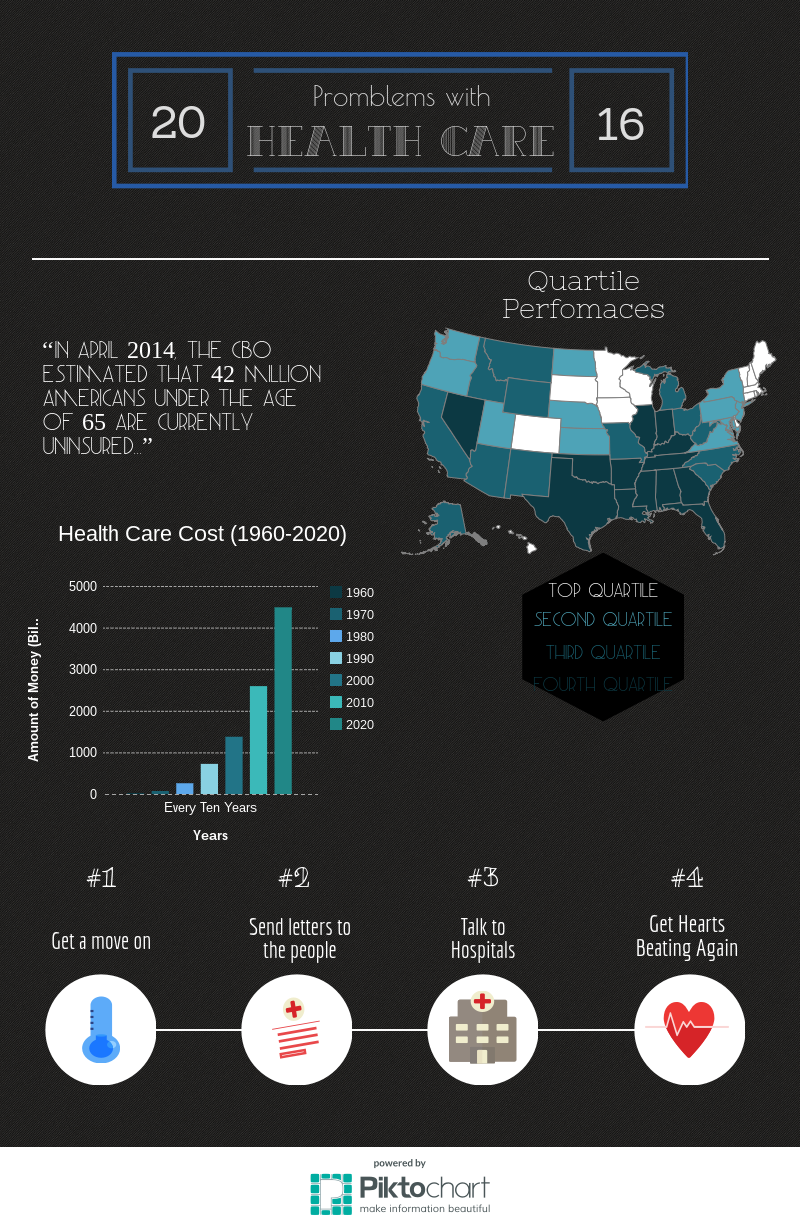 I would like to address that health care needs to be free or very low priced. This is becoming more important lately because many lower class and even some middle class citizens cannot get the right health care for themselves and their families. This has directly affected me because my family suffers through this. My nephew who is 2, has Cystic Fibrosis, and he is required to have a lot of treatments. My sister has to buy the equipment such as, Paris Vios, Protocol the vest, and a breathing machine called Cayston Altera, all of which cost a fortune.

Health care is a major problem in America today because the medical world is not able to fund research to find cures for diseases. According to the APHA (American Public Health Association), “Today, seven in ten deaths in the U.S. are related to chronic diseases such as obesity, diabetes, high blood pressure, heart disease, and cancer, which are largely preventable.” This example shows that change needs to occur because these people who are dying, didn’t have the appropriate or right health care, or could not afford medicine. If this problem is fixed, then we wouldn’t have to worry as much as people dying for something that is curable and not being able to afford finding cures for diseases.

Health care is a major issue today in America because there is a growing number of adults who are not insured. According to the APHA, “In April 2014, the Congressional Business Office (CBO), estimated that 42 million Americans under the age of 65 are currently uninsured...” This example shows that change needs to occur because as a person becomes older, they are more likely to find more health issues that is wrong with them. So, a person needs health care to fix those health issues. Unfortunately, those people only have so much money they can spend on healthcare.

Some may say, paying more will get you the best of the best health care. Which in a case is true, however, not all people can afford to pay off their medical bills. It is clear that health care is affecting a lot of citizens here in America, and according to Medicaid and the Affordable Care Act, “Medicaid is a broken system that needs to be streamlined, not expanded.”

I would be greatly honored if you could do something about it. Future President, please try to fix this by reducing costs of equipment and medication that needs to be bought for those who live off of them. This would help tremendously and save tons of money for people that need the money for other living purposes.

So as you can see, health care is a major issue today. This change of making healthcare affordable for all, will decrease death rates, decrease debt, increase health, and increase life expectancy. According to Centers for Medicare & Medicaid services, “Before this could be fixed, health care spending represented 17.2% of our gross domestic product in 2011.” My family struggles to live because of the tremendous amount of debt we’re in, because of health care. With my nephew having a lung disease, and my dad suffering through dementia, and he also has kidney failure; which they could go out any moment now. Also we cannot find someone to donate a kidney, that’s not a relative. And he has very high blood pressure, meaning he has a machine to check his pressure and takes like 6 types of medicines. And we’re so worried about him and my nephew, we keep paying tremendous amount of money to make sure they are taken care of properly. In conclusion, making it affordable, will give opportunities to those who cannot afford other stuff, such as food, and schooling. Thank you for your time and consideration; it’s greatly honored.

medical expenses medicaid health
Published on Nov 8, 2016
Report a problem... When should you flag content? If the user is making personal attacks, using profanity or harassing someone, please flag this content as inappropriate. We encourage different opinions, respectfully presented, as an exercise in free speech.
Oak Hills High School

Help the Victims of Nature's Wrath

All over the world, millions of people suffer from the effects of natural disasters. Do you want to live in a world where innocent victims don't re...

The government needs to do more to protect the United States from groups such as ISIS.

Homeless Veterans and Their Health

My letter to the president has to do with homless veterans and how that is a problem, as well as how thier health is affect due to lack of vaccines...

Health care should be equal