In our world, many places have an abundant supply of clean water. When the people there become thirsty, they can easily go to a water fountain or grab a cup of water without worrying about losing this precious liquid or contracting diseases. However, some parts of the world suffer droughts, drink toxic water, or both. This is because the world is wasting and losing fresh, clean water. However, many people across the country are working together to solve the freshwater crisis, and as president, you have the power to help these people.

One of the reasons why we should assist the world in the conservation of water is because our population is growing rapidly. As of today, there are over three hundred million people in the United States and over seven billion in the world. All seven billion of these people need to drink fresh water to live, as the human body is sixty percent water. It is recommended that people drink about two liters of water a day. That means over fourteen billion liters of fresh water should be consumed a day! To make matters worse, water is also used to produce clothing, food, computers, moving our waste stream, and keeping the environment healthy, which are also needed and wanted by humans. Did you know that the average hamburger takes 630 gallons of water to produce? In my mind, this is absurd and must be fixed.

Not only are people wasting fresh water, but we are contaminating it, too. Our pipes are old and poisonous, which can be harmful to water quality. Water is flowing through extremely old pipes, including cast-iron pipes from the 1880s and around the end of World War II. Because these pipes are so old, there is a higher chance that they could contain poisonous chemicals. One example of a water crisis due to our aging infrastructure happened in Flint, Michigan. Also, believe it or not, some of our pipes are still made out of lead. In 1991, the city of Madison, Wisconsin, started replacing 8,000 lead pipes, taking $15.5 million and 11 years. Wichita, Kansas, has almost completed a decade-long project to replace their lead pipes with copper or plastic pipes, costing about $1,200 per pipe. And Lansing, Michigan, has recently released a plan for replacing its lead pipes, just this spring! I think that these lead pipes should have been replaced long before, and I hope you agree.

One final reason why the world is losing fresh water is because agricultural activities, when not well monitored, can cause serious water pollution. Water pollution from agriculture is caused by runoff, when rain or snow falls on the ground, picking up pollutants on the ground. Causes of the pollution include poorly managed animal feeding operations, overgrazing, overworking the land, and poorly managed application of pesticides, irrigation water, and fertilizer, all of which are strongly tied to agriculture. This water then gets into our water systems and is used for the agriculture it was polluted by, causing even more harm to our health. Fruits and vegetables that absorb contaminated water spread diseases to us, and animals sickened by the contaminated water release infectious microbes that can contaminate more water, creating an interminable cycle of water contamination. Somebody needs to put an end to this, and soon!

Many people from other countries think of the United States as a conservative and caring country. But can we really be considered conservative if we waste a large percent of our fresh water? And can we really be considered caring if we pollute a lot of the clean water that's left? President, please help our country and others from losing all usable fresh, clean water. You could help by enforcing laws restricting overgrazing and overworking the land and by setting strong pollution standards. You could also pay more attention to pipe quality and water usage by businesses. Thank you for reading my letter and acknowledging my hopes for a happier, healthier, hydrated future. 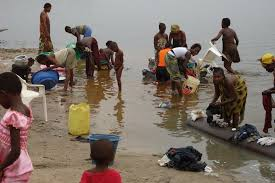 crisis water pollution water
Published on Nov 8, 2016
Report a problem... When should you flag content? If the user is making personal attacks, using profanity or harassing someone, please flag this content as inappropriate. We encourage different opinions, respectfully presented, as an exercise in free speech.
Elgin Academy

Since September 11th there has been an increase in airport security, but is it enough?

No Guns in America

Gun problems in the USA need to stop.

Why should there be different rights for different parties that aren't for being Republics/Democrats?

The cost of college makes it more difficult for students to continue their education.

Illegal Immigration is truly an issue, but the way in which you tend to take care of it is no solution to it.

Ocean pollution is all around you making our beautiful oceans a dangerous place to be .

Clean water is important to everyone.

The United States is depleting its natural resources.