I want to discuss with you the issue of Syrian refugees. Syria is going through a brutal and violent civil war, and millions of refugees are fleeing the country to avoid the violence. Many Syrian mothers and children have lost their homes and sources of food; therefore, they are unable to survive in the remaining conditions of their countries. Other Syrians are either being killed or forced to leave the country. They have tried to flee to other nations in Europe, North America, and nearby countries in the Middle East.

The United States has brought in over 10,000 Syrians, but there are still many more Syrian refugees who seek a place to stay. Some countries don't allow refugees and others will only allow a limited amount of refugees because they fear that foreign terrorists will disguise themselves as a refugee and slip into their country. Ever since the terrorist attack in Paris allegedly caused by ISIS, people have become xenophobic towards the people from Syria and nearby Middle Eastern countries. People are judging the refugees based on their emotions and prejudices which block out their rational senses. We have to take into account that, according to David Bier from the Foundation for Economic Education, the U.S. started the refugee program in 1980 which received 7.5 million refugees over the years and since then, there haven’t been any acts of terrorism from the refugees.

We have taken thousands of refugees, but that doesn’t compare to the number of refugees other countries have taken in. Countries like Jordan and Lebanon have taken millions of refugees even though they don’t have the resources to support them. Canada has taken as many refugees as we have and their population is a tenth of the U.S. The U.S. has become a dominant superpower of the world with programs, fundraisers, and organizations that can help the refugees.

I think the U.S. can afford to take in more Syrian refugees. Even though the U.S. is vulnerable to terrorist attacks, we can still avoid them with our vetting process. The United Nations High Commissioner for Refugees first determines if they should be resettled which takes about 4-10 months. Then the Department of Homeland Security officials checks their biography and fingerprints through federal terrorism and criminal databases which takes one to two years longer. The refugees are checked thoroughly so there is no need to fear that they can be terrorists.

The U.S is a strong yet compassionate nation where everyone was an immigrant at one time. American values dictate that we must show leadership during this time of crisis. There is no likely reason to fear refugees given our current vetting system and track record. I urge you to support an expansion of U.S. support for Syrian refugees and show the best of American values. 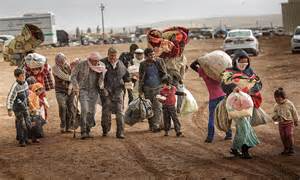 islamophobia syrian refugees
Published on Oct 18, 2016
Report a problem... When should you flag content? If the user is making personal attacks, using profanity or harassing someone, please flag this content as inappropriate. We encourage different opinions, respectfully presented, as an exercise in free speech.
Newbury Park High School

Physician-assisted suicide should be legalized in the United states as an optional way to die on the grounds of irreversible illness or unbearable ...

Recent studies have shown that 1 in 5 people who returned home from wars in Iraq and Afghanistan were diagnosed with some type of post-deployment s...

Women should not be forced to keep a baby if they aren't ready. The woman who is carrying the baby should have the decision if she wants an abortio...

Leadership and integrity is about doing the right thing, not the popular opinion.

Why we should be excepting more Syrian refugees

Anti-Sikh hate is discrimination and hateful crimes directed specifically towards Sikhs and often mistaken for Islamophobia.