I acknowledge that you are well aware of the problems in the middle east and the fight against terrorism, after all it is an issue impossible to ignore. With Isis on the rise and recruitment ever-growing globally in a complex web, fear engulfs the general population, who hope that their lives will remain untouched.

In the US we are all too familiar with the results of radicalization and terrorism with tragedies like 9/11, and on a smaller scale, the recent stabbings in St. Cloud. As more attacks accumulate it creates a deeper wedge between the different religions, setting the false precedent that all Muslims are violent with bad intentions. There is a Islamophobia and a stereotype that all Muslims are terrorists. According to Fox News, after the St. Cloud incident the restaurant sign at Treats Family Restaurant in Lonsdale advertised out front, “Muslims get out”. This not only is the definition of a stereotype, indicating that Muslims are terrorists, it is dangerous. We need to work with the Muslim population and use them as a resource to fight terrorism, they are Americans and it is important to treat them as such. If we judge and group all of them into one radicalized offshoot, there will be a higher percentage turning to radical terrorist groups like ISIS out of frustration and anger. The solution to combating the stigma starts with understanding, respect, and collaboration. Only in this way we can stop this is to join together as Americans to solve it.

In short, a group of people are suffering in this country and countless lives could be protected if you approach this in the right way – and most importantly with the right attitude. Anger, hatred, and isolation aren't the answer and should never be put up with in America – the ramifications of such would be disastrous. Please make this issue a priority in your upcoming term and address it as soon as possible. 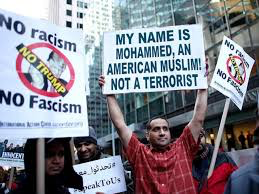 isis islamophobia
Published on Oct 18, 2016
Report a problem... When should you flag content? If the user is making personal attacks, using profanity or harassing someone, please flag this content as inappropriate. We encourage different opinions, respectfully presented, as an exercise in free speech.
Benilde-St. Margaret's School

Abortion is a very controversial topic. This paper discusses positives and pro choice opinions while also stating facts and showing how abortion is...

Stop the Hate on Muslims

Stopping the hate on people who don't deserve it!

I hope that the next president can work to prevent radical Islamic terrorism in our country.

Islamophobia in the United States

Islamophobia is a huge issue that our country is facing today. ISIS will never be made up of Muslims.

Stop the stereotyping of Muslims!